Guwahati: Fifteen people were killed and over 48 others injured when a cloudburst struck the area near the holy shrine of Amarnath on Friday, said Dr A Shah, Chief Medical Officer Ganderbal, Jammu and Kashmir.

The Army on Saturday informed that 15 people have died in the cloud burst incident near the holy shrine of Amarnath.

“15 dead in the Amarnath cloud burst incident. The rescue operation continues. The foot yatra has been temporarily suspended,” Indian Army officials said.
Around 65 people have been injured in the incident.

Indian Air Force’s Mi-17 helicopters have taken off from Srinagar to join the rescue operations at the Amarnath cave site. The aircraft were on standby since morning but could not take off due to bad weather in Srinagar and adjoining areas, said the IAF officials.

The Indo-Tibetan Border Police (ITBP) on Saturday informed that about 15,000 people were safely shifted till now after the cloudburst incident near the holy shrine of Amarnath on Friday.

In a statement, the ITBP said, “Most of the yatris who were stranded near Holy cave area due to flash flood last evening have been shifted to Panjtarni. ITBP had expanded its Route opening and protection parties from Lower Holy cave to Panjtarni. The evacuation continued till 3.38 AM. No yatri is left on the track. About 15,000 people were safely shifted till now.”

The Army also informed that rescue dogs are also being used in the operation. 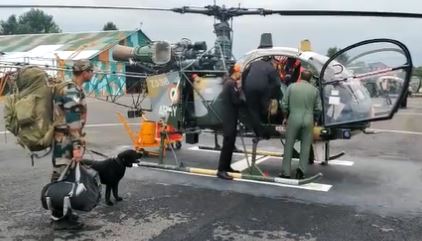 A cloudburst incident took place at the holy cave area of Amarnath on Friday which resulted in a heavy discharge of water in the ‘Nallah’, adjoining the holy cave.