Zee5 to stream ‘Friends: The Reunion’ for Indian fans

Guwahati: : Indian fans of ‘Friends: The Reunion’ has a reason to rejoice! As Zee5 video streaming platform on Sunday has announced that the platform will exclusively premiere the sitcom.

The entire fan community of ‘Friends: The Reunion’ has been waiting for the show to stream on HBO Max on 27 May, Thursday but India’s home-grown video streaming platform took to their official Twitter handle to announce that the platform will exclusively premiere the show for the Indian fans soon.

“#FriendsReunionOnZEE5 Could we BE more excited? #StayTuned Buy the premium subscription for Rs. 499 & watch Friends: The Reunion exclusively on #ZEE5,” the tweet read. 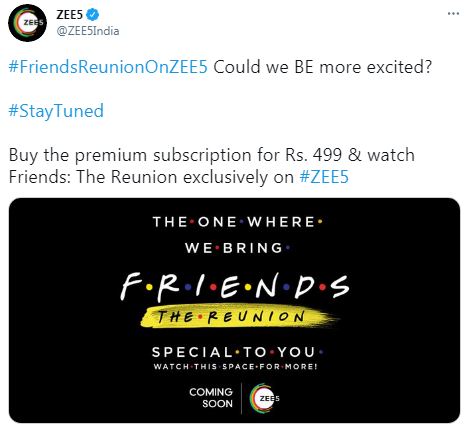 Earlier, the reunion special was delayed multiple times due to the production shutdown caused by the COVID-19 pandemic. It was originally set to film in February 2020 but was only able to begin filming in April.

The special marks the star’s return to the iconic comedy’s original soundstage, Stage 24, on the Warner Bros. Studio lot in Burbank for a celebration.

All 10 seasons of ‘Friends’ left Netflix and joined HBO Max in a deal that is rumoured to have cost Warner Media over USD 400 million for the rights to the original series.