Wuhan [China]: A cringe-inducing clip of a Chinese woman devouring a whole cooked bat recently emerged on Twitter.
What makes it a matter of concern is that bats are considered one of the primary vectors of the coronavirus that has mainly affected China and also some other countries.
According to the New York Post, the video was shot in China’s Wuhan province at an unidentified restaurant.
The woman can be seen biting through what appears to be a fruit bat that is held to her mouth with a pair of chopsticks.
As the woman attempts to nibble the anima’s wings, a man can be heard instructing her in Chinese: “Eat the meat! [Don’t] eat the skin” and “[You] should eat the meat on its back,” reported New York Post. 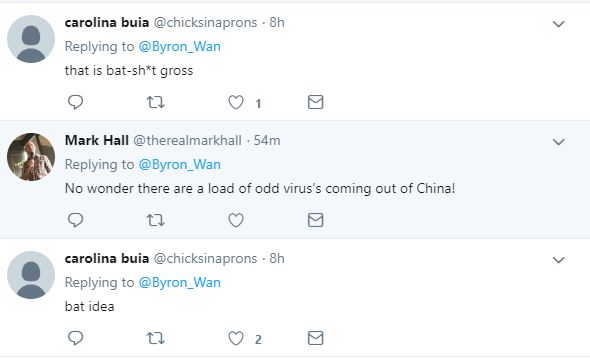 The video made rounds on Twitter after being initially revealed by Apple Daily — a news website from Hong Kong — and incited the wrath of countless social media users in the comment section.
According to experts, such eating habits can potentially put people at risk of contracting the highly contagious disease.
Citing Business Insider, New York post explained that the origins of the coronavirus have been traced back to a meat market situated in the Wuhan province which sold exotic animals such as civets and snakes that were most likely infected by bats.
Bat meat is considered as a folk remedy in the Chinese traditional system of medicine, meaning that people won’t forgo relishing these flying mammals anytime soon. (ANI)