Mumbai: By sharing a glimpse of the upcoming peppy number, Bollywood star Salman Khan on Thursday shared the teaser of a new song from ‘Radhe’ titled ‘Dil De Diya’ featuring him and Jacqueline Fernandez.

The song will be released tomorrow. The ‘Ek Tha Tiger’ star took to Instagram and posted a short clip from the upcoming song.

The video sees a lit-up stage of a bar in which Salman is seen shaking a leg with his ‘Kick’ co-star. Jacqueline looks gorgeous as she sets the stage on fire with her killer dance moves while Salman also impresses by his unique dancing steps. 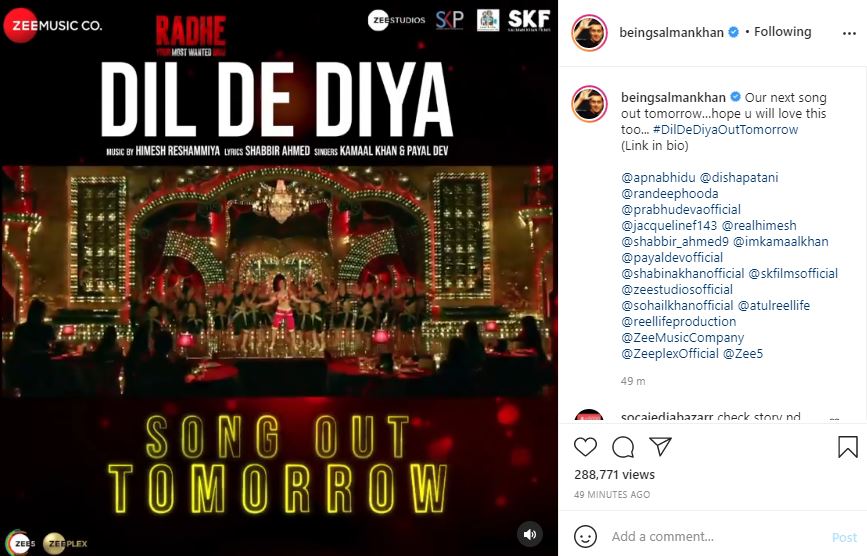 Himesh Reshammiya has composed the music of the ‘Dile De Diya’, and Shabbir Ahmed is the lyricist. Kamaal Khan and Payal Dev have vocalised the song, and Shabina Khan has choreographed it.

Taking to caption, the ‘Ready’ star wrote, “Our next song out tomorrow…hope u will love this too… #DilDeDiyaOutTomorrow.”

Packed with Salman Khan’s signature style of dance, his pairing with the current favourite of youth, the hot and sultry Disha Patani, Shaikh Jani Basha also known as Jani Master’s choreography and Prabhudeva’s direction, ‘Seeti Maar’ has all the elements to make the track a rage amongst the audience.

The movie will release in over 40 countries, including a theatrical release in major overseas markets on May 13 2021, on the occasion of Eid. The film will be available on ZEE5 with ZEE’s pay per view service ZEEPlex on the Zee5 OTT platform and all leading DTH operators. (ANI)