New Delhi: Priyanka Chopra and Nick Jonas family is slowly growing as they were joined by the newest member, a puppy named Gino.

The global star took to her social media to introduce her new fur baby to the world by sharing a sweet snap of Gino posing with her husband.

“Back with my boys.. welcome home @ginothegerman .. we still love you most @diariesofdiana @nickjonas,” she wrote while also showing affection to her first dog, Diana Chopra. 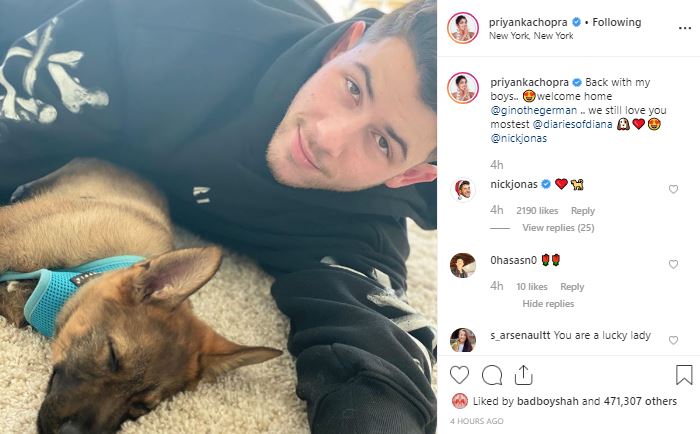 Exuding love over his little pup, Nick too shared a heart-warming post, describing how happy he is with the “best surprise” by his wife.
“Pri came home with the absolute best surprise this morning. Please meet our new pup Gino,” he wrote on Twitter with a swoon-worthy clip of the moment sweet little Gino jumped on him in bed.

“I haven’t stopped smiling since I woke up this morning and finally realised what was going on,” he continued. “Thank you.”

Priyanka too shared the same video in a separate post saying, “so much cute in the same frame. happy almost anniversary baby.”

The couple has also created an Instagram account for Gino, the same way they did for Diana. “I’m here. I’m home,” Gino’s first post on his personal account read.
“We love you Gino,” ‘The Sky Is Pink’ star commented on the post wherein the Jonas Brother member and his new pup can be seen cuddling. 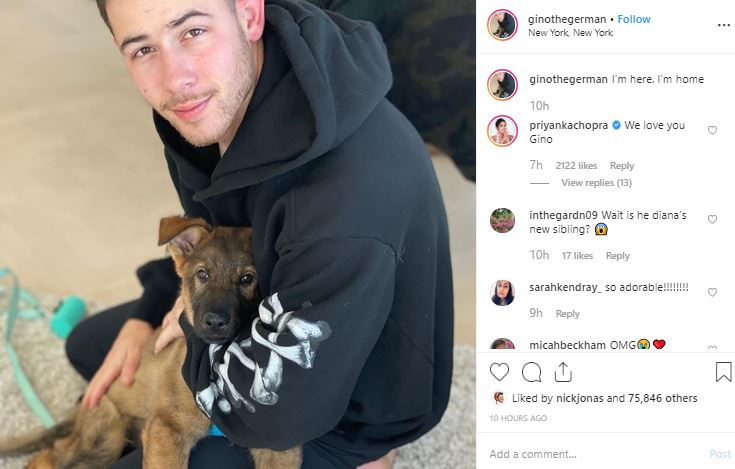 Meanwhile, on the work front, the 37-year-old actor was recently shooting for her next ‘The White Tiger’ in the national capital.
The film is based on the Booker Prize-winning book of the same name by Aravind Adiga.

Ramin Bahrani, who recently directed Michael B. Jordan and Michael Shannon starre ‘Fahrenheit 451,’ will be directing the project, reported The Hollywood Reporter.

Apart from PeeCee and Rajkummar, newcomer Adarsh Gourav will also be seen in the film produced by Mukul Deora.

The book is about the story of an extraordinary journey of a self-made man from a tea-shop worker in a village to a successful entrepreneur in a big city. (ANI)