The ‘Bharat’ actor posted two pictures on Instagram that featured her describing her ‘Monday Blues’.

In the pictures, Kaif looks enchanting as she posed candidly for the lens. The ‘Baar Baar Dekho’ star is seen dressed in a round-neck titled blue T-shirt which read ‘Feeling Great’. She teamed up the look with denim shorts. With her straight loose hairstyle, she carried a minimal-makeup look while gracing the snap with her radiant smile. 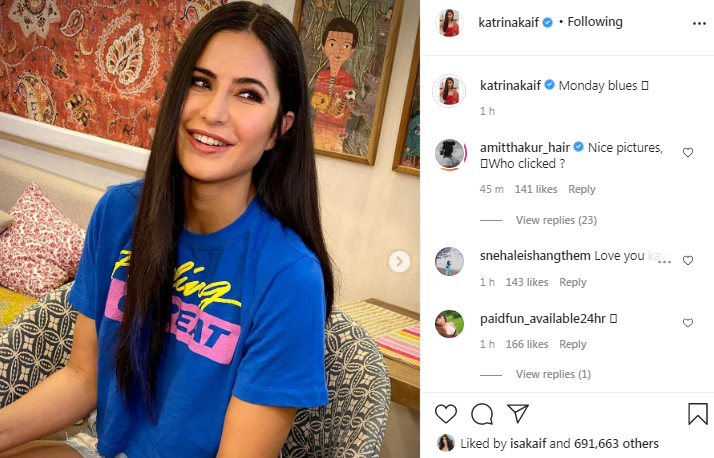 With the post hitting the photo-sharing platform, it garnered more than 6 lakh likes while scores of the ‘Namastey London’ star’s fans chimed into the comments section and left fire and lovestruck emoticons.

The actor, who made her Instagram debut in April 2017, has been quite active on the photo-sharing application and keeps updating her fans about her activities by posting pictures and videos.
Meanwhile, on the work front, Katrina has ‘Tiger 3’, ‘Phone Bhoot’, ‘Sooryavanshi’ and a superhero movie with Ali Abbas Zafar coming up. (ANI)