Adil Teli, a 23-year-old youth who hails from Narbal in Kashmir’s Budgam district, completed the distance on cycle in eight days, 1 hour and 37 minutes. He started his journey from the iconic Ghanta Ghar at Lal Chowk in Srinagar around 7:30 am on March 22 this year and reached Kanyakumari around 9 am on March 30.

Speaking to ANI Adil said, “I belong to Narwal. I did my schooling till tenth from Narwal. I went to Magam to complete my studies for classes 11th and 12th. Then I went to Gandhi Memorial College, Srinagar for graduation. Currently, I am pursuing my post-graduation from Guru Nanak Dev University in Amritsar where I am also undergoing cycling training.” 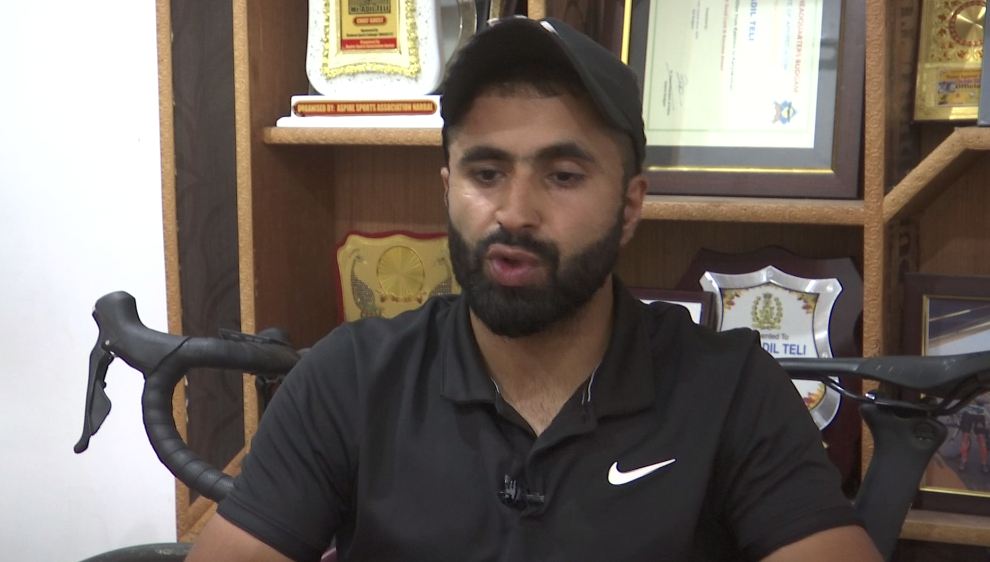 Further talking about how cycling became his passion, Adil said, “In 2013, I represented Jammu and Kashmir at the national level for the first time. After that, my interest in cycling only kept on increasing. But at that time the biggest challenge was that not many facilities were available. But I was determined to make cycling my profession, and I also knew that to achieve this I need to work hard. Since 2013, I have been representing Jammu and Kashmir at the national and senior national levels. I have represented Kashmir University for three years.”

In 2019, Adil participated in a non-stop cycling event where he said he cycled between Srinagar to Leh and covered a distance of 40 kms in 26 hours. Adil said this event motivated him to realise his capabilities in the sporting activity.

Talking about his family’s support to him in realising his dreams, Adil said, “My parents have been my inspiration and I derive my motivation from them. It has been six years now that I have been representing Jammu and Kashmir at the national level. Cycling is an expensive sport. A lot of costly equipments are required for the sport. But my parents never made me feel that they will not be able to afford all that because of a financial crisis. They always supported me.”

Speaking about his aspirations and struggles, Adil said, “I wanted to give this attempt but was not able to implement it for a long time as I was unable to find sponsors because it involved huge costs because this needed physiotherapist, nutritionist, cameraman, a documentary maker who are needed in the journey.”

“Then one of my friends introduced me to a sponsor who told me to prepare and assured of all possible help in making a world record. My coach Rajesh Kaushik trained me for this. After training for months, I applied for the Guinness world record in November last year and at the end of February, my application got accepted.

Speaking about his record, the young cyclist said, “On March 22, I embarked on my journey. The day my journey was flagged off, it was raining all day in Srinagar. I would thank the administration of the union territory that the new tunnel joining Kazikund to Banihal was specially opened for me. Srinagar-Jammu highway became very risky because of frequent landslides due to bad weather. I faced many difficulties but I was determined to break the record,” said the young cyclist.

“I faced many health conditions including swelling in my knees, sunburn etc, but the tears which I saw rolling down my mother’s cheeks at the flagging of my longest cycling expedition, gave me strength throughout the journey. The total time taken by me to beat the record was 8 days. The administration and the people of Kashmir supported me a lot in this expedition,” he added. (ANI)