Mumbai (Maharashtra): The makers of John Abraham and Divya Khosla Kumar-starrer ‘Satyameva Jayate 2’ on Wednesday announced the release date of the action thriller as May 13, 2021. The film will hit theatres on the occasion of Eid.

The movie will lock horns with Salman Khan’s upcoming film ‘Radhe: Your Most Wanted Bhai’. 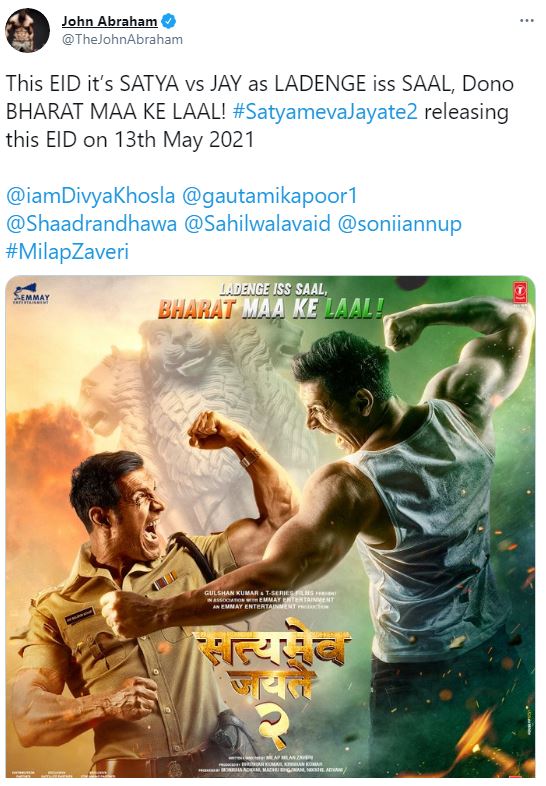 The ‘Dostana’ actor took to Twitter and announced the release date of ‘Satyameva Jayate 2’ along with an action-packed poster.

The poster of the film is seen dipped in tri-colour- orange white and green, with a shadow of the national emblem that signifies strength, courage, and confidence.

It features John in a dual avatar -as a police officer and as a common man, both seeing each other with rage and flexing their biceps.

Film trade analyst Taran Adarsh also confirmed that the clash of the two films is inevitable.

“There was speculation *within the film fraternity* that #SatyamevaJayate2 *might* shift to another date, it won’t clash with #Radhe this #Eid… But #SJ2 is definitely arriving… So, it’s #SalmanKhan versus #JohnAbraham this #Eid,” he tweeted.

Before the coronavirus wreaked havoc worldwide, ‘Satyameva Jayate 2 ‘was based in Mumbai. The director Milap Zaveri said that the roots of John’s character in the film are in Varanasi. The transition will give the film a pan-India feel, appealing even to the viewers in the interiors, he said.