Mandeep, who lost his father on Friday, played a match-winning knock to guide KXIP to their fifth consecutive win in the ongoing IPL.
KXIP chased down the target of 150 with eight wickets in hand and seven balls to spare against KKR. Mandeep and Chris Gayle played knocks of 66 and 51 respectively.
An emotional Mandeep dedicated his half-century to his late father.

Kohli said Mandeep is the most genuinely happy cricketer he knows and lauded the 28-year-old batsman for his gutsy knock.
“The most genuinely happy cricketer I know. To do what you’ve done in this testing time is because of your faith in live and your positive attitude. Well played shera. He’s blessing you from above. @mandeeps12 Lion hearted,” Kohli wrote in his Instagram story. 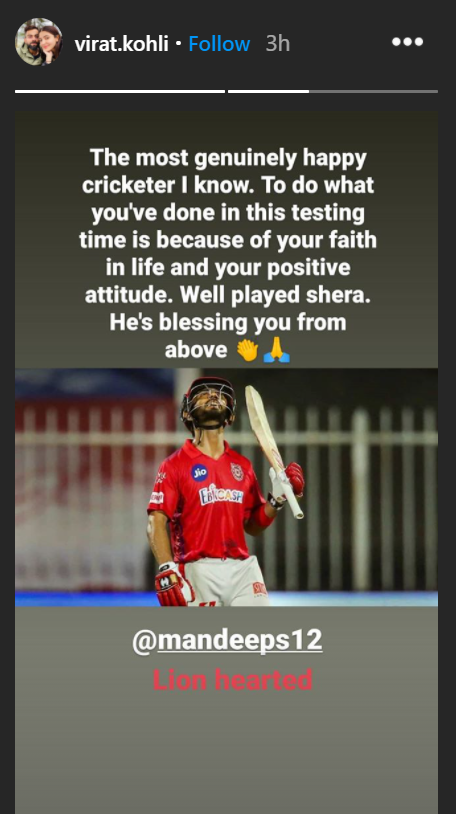 With this win, KXIP has moved to the fourth spot in the points table with 12 points while KKR has slipped to the fifth spot with as many points.

KXIP has now won their last five matches in the ongoing IPL, keeping the hopes of qualifying for the playoffs alive. They will next lock horns against Rajasthan Royals on Friday, October 30 at the Sheikh Zayed Stadium in Abu Dhabi. (ANI)