Washington: For all the environment lovers who are always keen on gathering knowledge about the world, Google has introduced a new interesting feature in its Google Earth app for you.

Google Earth app is a computer program, formerly known as Keyhole Earth Viewer, that renders a 3D representation of Earth, based primarily on satellite imagery.

To make the application more interesting, the search engine giant introduced a ‘Timelapse’ feature in it, which according to Mashable India, will allow users to travel back in time to see how Earth has changed over the past 37 years. 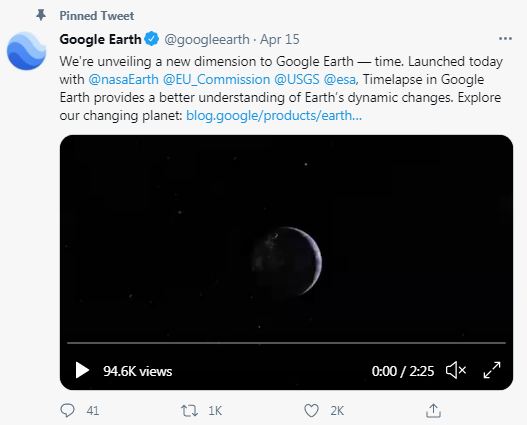 Mashable India reported that the feature will be a combination of 24 million satellite photos covering the entire planet. Through this, the users can select any point on the globe and see its evolution over time.

To make the new feature more interesting, Google has also introduced some guided tours in it, telling stories about the reasons for how the landscape changed, such as how forests have slowly made way for towns and cities, or how ice has melted in regions like the Columbia Glacier in Alaska.

For the new feature, Google partnered with the CREATE Lab at Carnegie Melon University to understand the reasons behind the changes in the landscape and tell these stories.

The satellite imageries that would be used for the feature amounted to be of 20 petabytes, which took over two million hours of processing time across thousands of machines.

As per Mashable India, the final result is a 4.4 TB video mosaic that covers the entire planet. Google has also committed to keeping updating Timelapse with imagery for the next 10 years. (ANI)