From Krishna on bike, to royal thrones; here’s how nation is prepping for Janmashtami

Coimbatore/Varanasi/Moradabad (Tamil Nadu/UP): The auspicious day Janmashtami is yet to arrive but people in the country are already soaked in religious fervour.

Devotees all over India are stepping out to scan the markets and bring back home the best lord Krishna idol. And to entertain their needs, shop owners are also experimenting in new ways.

Narendra Bose, a store manager in Coimbatore, explained how they conduct exhibitions every year and introduce new varieties of Krishna idols with eye-catchy artwork; differing in shapes, sizes and prices.

“Like every year, this year too, we are conducting a Krishna darshan exhibition in our showroom on Gokulashtami,” Narendra told ANI.

Observed on the eighth day of the month of Bhadrapada according to the Hindu calender, Janmashtami celebrates the birth of Lord Krishna.

“For this exhibition, we have brought Krishna idols in paper mache, clay, bronze, black and white metal, wooden articles scaling from 1 foot to 4 feet, and ranging from Rs. 150 to 3 lakh,” he added.

He, at the same time, highlighted how the recent floods in the state of Kerela have reduced their exports to other parts of the country.

“Most idols are brought from Kerela and Tamil Nadu but due to the floods, we have lost business.”

However, Narendra hoped to see a good response in the coming two days. Meanwhile, in Varanasi, Prime Minister Narendra Modi’s constituency, Janmashtami is being used to scale up social awareness. A shop keeper in the city explained that while they have welcomed new varieties, they aren’t compromising with social good.

“We have an all-new range of idols like one wearing a helmet. As the government is putting in efforts to make people aware about wearing helmets and following traffic rules, so this statue of laddoo Gopal can be taken as an example,” shared the shop keeper. 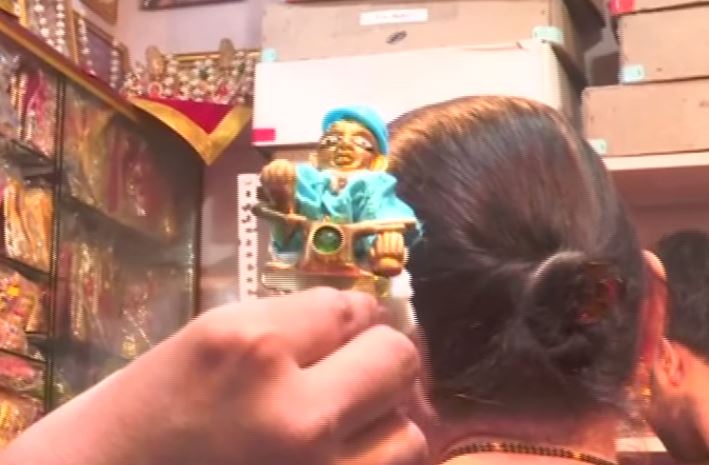 And their creativity isn’t limited to this but, “we also have Lord Krishna on a bike, dressed in a night suit, clad in western attire.” He continued, “The demand for such idols has risen such that we have run out of stock.”

An overjoyed customer at the shop also expressed happiness on seeing such unique varities.

“Since our government is time and again trying to raise awareness about road safety, so we are also taking this statue of Lord Krishna on a bike who is also wearing a helmet. This sends a message and even our kid’s get motivated,” said the man.

The brass city of India, as Moradabad is known, is also witnessing all new kinds of costumes and thrones for the deity.

“We have all the items required to decorate Lord Krishna on the day. We have new designs of jhula, throne, crown, embroidered clothes,” said a shop owner. (ANI)