New Delhi : Ever since the makers revealed the first look from the much-anticipated film ‘Chhapaak,’ the expectation has gone up in the air.

To add to the buzz, the lead actor of the movie Deepika Padukone unveiled a new poster from the upcoming outing on social media on Thursday.

Deepika, who is essaying the role of an acid attack survivor, hopped on to Instagram to share the latest poster from ‘Chhapaak.’

Taking a dance step, enjoying with her friends, Malti, the on-screen character name of the acid victim-survivor, played by Deepika, is seen giving her deep from within laugh in the very much overwhelming poster. 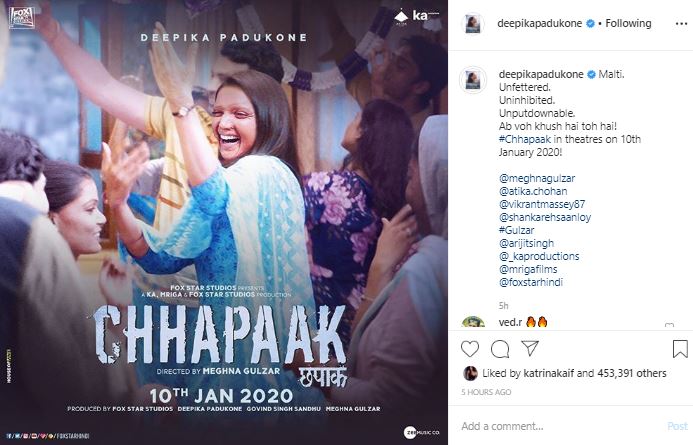 Earlier in the day, the ‘Padmaavat’ actor shared a video on Twitter that saw the hard-hitting video promo with the snippets from the movie.

The trailer of the movie that got released a few weeks left everyone overwhelmed and Deepika got emotional at the launch of the same.

Directed by Meghna Gulzar, the film narrates the saga of the courageous journey of Malti, who fights through all the hardships in courts.
Co-star Vikrant is portraying the role of Amol, her supporter and later love interest.

The movie is based on the real-life acid attack survivor Laxmi, who at the age of 15, was attacked allegedly by a spurned lover in 2005.

Laxmi had to undergo several surgeries. Later, she took up the job of helping acid attack survivors and promoted campaigns to stop such attacks.

Her attacker, a 32-year old man, was an acquaintance of her family. Laxmi is a well-known advocate of stricter punishments in acid attack cases.

The makers of the movie are cathing all the right threads in an effort to make the story reach millions, be it intriguing posters, BTS from the movie, campaigns promoting the idea of self-love and minimising the societal odds towards the acid-victim survivors.