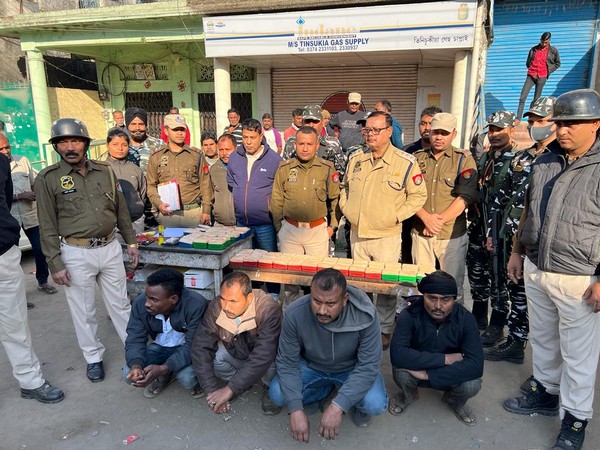 In a major breakthrough against drug cartels, the Tinsukia district police on Saturday seized heroin worth lakhs and arrested four in connection with the case, officials said.

This operation was conducted under the leadership of DSP Hiranya Bora of Tinsukia Sadar, on the basis of secret information. The recovery of heroin worth lakhs was done from a bus coming from Dimapur en route to Tinsukia.

Taking to Twitter, Tinsukia police wrote, “The efforts to curb the menace of drugs is ON!!! Based on secret information, Tinsukia Police intercepted a vehicle and recovered 765.81gm Heroin near ASTC Bus Stand”.

Informing about the seizure, District Superintendent of Police (DSP), Hiranya Borah said, “60 packets of heroin, which were brought hidden in the packets of soap, have been seized. The market value of which could be more than Rs 30 lakhs”.

About the Anti-Drug campaign, Borah said, “The anti-drug campaign being run in Tinsukia district under the leadership of Superintendent of Police (SP), Tinsukia, Abhijit Gurav, is getting success one after the other. In continuation of the campaign, heroin worth lakhs has been seized from bus number AS01JC 6754, named ‘Pooja’ which reached Tinsukia from Dimapur this morning”.

“Heroin boxes were being brought hidden in clothes”, he further stated.

DSP Borah further said, “This campaign has also revealed the fact that clothes and other materials are being brought illegally from Dimapur to Tinsukia by the businessmen without paying GST”.

Earlier on Friday, Contraband drugs worth Rs 60-70 crore were seized and five people were arrested in Assam’s Cachar.