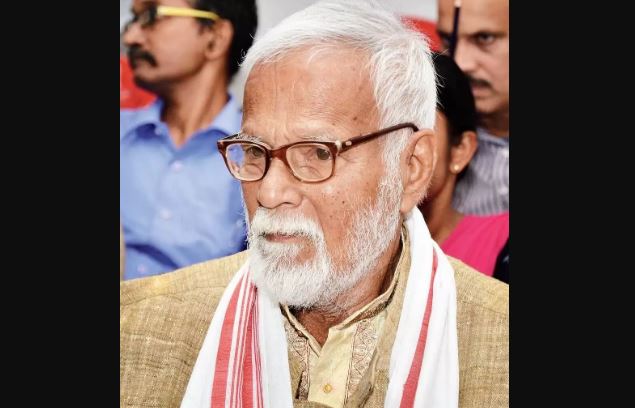 Neel Pawan Baruah died on Friday at the Gauhati Medical College Hospital following a prolonged illness. He was 84.

His wife, the eminent singer and Padma Shri awardee Dipali Borthakur, had predeceased him.

Baruah was admitted to the hospital on September 22 due to various old age-related ailments and he breathed his last on Friday afternoon.

Assam Chief Minister Himanta Biswa Sarma said that the passing away of the artist is not only a big loss to the art fraternity but to the entire cultural field of the state.

“He pursued art with dedication for several decades and his death is an irreparable loss. I pray for the departed soul and extend my heart-felt condolences to his kins”, Sarma said.

Union Minister for Shipping, Port, Waterways and Ayush Sarbananda Sonowal in his message said that Baruah had given a new dimension to the art scenario in the state and created a distinct niche for himself with his paint brushes and canvases.

“His simplicity, sensitivity and love for humanity attracted many and his passing away is a great loss to both the art world and the state”, Sonowal said.

An alumni of Santiniketan’s Kala Bhawan, Baruah was a versatile artist with his oeuvre ranging from painting, pottery, mask-making and writing poetry.

After completing his graduation in fine arts, he learnt glazed pottery at Sriniketan and also had a stint at the Garhi Studio in New Delhi.

An artist who often experimented with different media, Baruah has left a rich legacy of sketches on cigarette packets and matchboxes which has been displayed at many exhibitions in the state and across the country.

After his return from Santiniketan, he had taught for a brief period at the Government Art School here and went on to form the Assam Fine Arts and Craft Society in 1971.

Baruah went on to set up an art school at his residence where children from far and near were taught art in an informal manner without any fixed method but encouraging them to improve their paintings in their own style and ways.

Baruah, who had made a defining and distinct contribution to Assam’s contemporary art movement, had his work displayed at various places across the country.

One of his paintings is currently on display at the ongoing exhibition of contemporary art by Kala Bhawan Alumni of Himalayan Terrain (KAHT) at the Srimanta Sankardeva Kalakshetra here.

The artist handed over 55 of his significant artworks in different media ranging from oils to sketches in ink and acrylic to Tezpur University which will be on permanent display at the Neel Pawan Baruah Museum of Modern Art set up by the university.

A prolific writer, Baruah wrote several poems, essays on art and has three books on art to his credit.