Washington D.C.: American singer Ariana Grande and Justin Bieber have teamed up to help others in need during the COVID-19 pandemic.

Grande and Bieber announced on Friday(local time) that they are working on a song, ‘Stuck With U,’ which will drop next week with all proceeds slated to go to coronavirus relief.

The 26-year-old songstress Ariana tweeted on Friday, “Stuck with u by me and @justinbieber out May 8th. head to my Instagram for more info. thank u to @1strcf and @sb_projects for making this possible.” 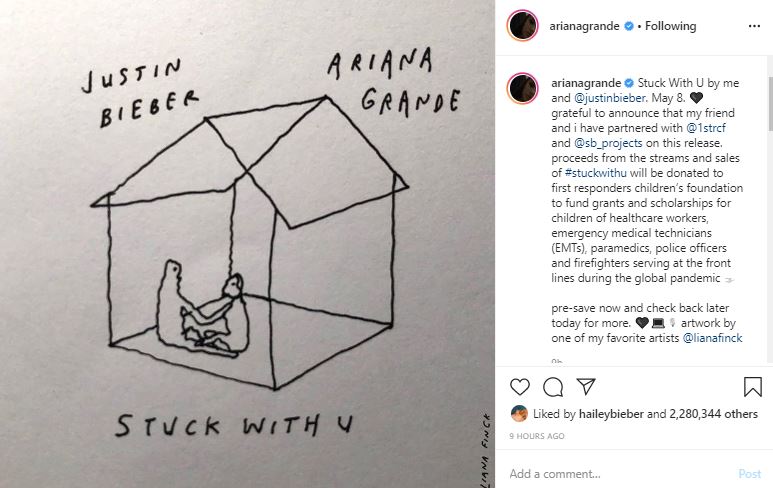 Grande also announced the news on Instagram, and wrote, “Grateful to announce that my friend and i have partnered with @1strcf and @sb_projects on this release. proceeds from the streams and sales of #stuckwithu will be donated to first responders children’s foundation to fund grants and scholarships for children of healthcare workers, emergency medical technicians (EMTs), paramedics, police officers and firefighters serving at the front lines during the global pandemic.”

The 26-year-old pop-star Bieber, also added in a statement, “More than ever we are seeing the selfless, tireless and amazing work that doctors, nurses and healthcare providers give to the world every day. It is our hope we can lend our voices to raise awareness and give much-needed support for them and their families. It’s my honour to come together with my friend Ariana and our SB Projects family to try and do some good.”

The two music superstars have also independently been helping people in need.

According to sources to Page Six, Grande, who has been communicating her longing to make music during the quarantine, has sent fans between 500 and 1,000 USD using the Venmo app.

One of the Ariana fans told Page Six that the ‘Senorita’ singer “took care of my salary for the month.” She has helped more than 20 fans, said the outlet.

The ‘7 rings’ singer also joined the Disney family singalong in April and sang ‘I Won’t Say I’m In Love’ the animated film ‘Hercules.’

Back in February, Bieber cantered his efforts on China, saying at the time that he “couldn’t imagine how scary it would be if a new disease was effecting my wife and my family and friends.”

The ‘Yummy’ singer said he made a donation to the country and urged his followers to join in on the conversation.

Bieber also accepted the #AllInChallenge to raise money for COVID relief. The singer said he will fly to your house for a private concert and sing ‘One Less Lonely Girl.’ (ANI)