Karva Chauth is a special occasion dedicated to married couples. It is considered to be one of the most sacred traditions for married Hindu women, who observe a fast from sunrise to moonrise for the long life, prosperity, and well-being of their spouse.
Extending his wishes, Big B took to his Twitter handle and shared a picture from the title track of their 2001 family drama ‘Kabhi Khushi Kabhie Gham’ in which he could be seen hugging Jaya.

Sharing the snap, he wrote, “Many Many Wishes on Karva Chauth. Good luck all,” and added a string of emojis to it. 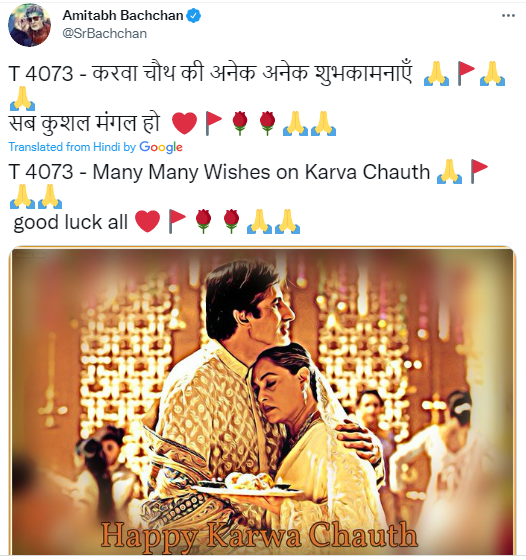 Meanwhile, on the work front, Big B has been busy hosting the new season of ‘Kaun Banega Crorepati’. Speaking of films, he will be seen in ‘Mayday’, ‘Jhund’, ‘Good Bye’, ‘Brahmastra’, and ‘The Intern’ Hindi adaptation. He is also a part of Anupam Kher and Parineeti Chopra’s starrer ‘Uunchai’.

On the other hand, Jaya was last seen on the big screen in the 2016 film ‘Ki & Ka’, where she played herself in a cameo role.

However, she is set to return with the Karan Johar-directorial ‘Rocky Aur Rani Ki Prem Kahani’, which will also star Ranveer Singh and Alia Bhatt along with Dharmendra and Shabana Azmi. (ANI)