Mumbai (Maharashtra): Superstar Akshay Kumar recently recreated his iconic ‘Phir Hera Pheri’ side stance while promoting his much-awaited movie ‘Sooryavanshi’.
Taking to his Instagram handle, Akshay shared a picture in which he could be seen recreating the pose of his 2006 blockbuster ‘Phir Hera Pheri’ character Raju.

He could be seen sporting a snake print shirt and sunglasses, perfectly reflecting Raju’s pose who posed in a bold printed shirt and black sunglasses.

“Side wala swag!” wrote Akshay on his Instagram handle as he introduced his ‘waiting pose’ for ‘Sooryavanshi’ to hit cinemas on November 5.

“That’s my waiting pose for #Sooryavanshi to hit cinemas on 5th Nov. Strike your favourite pose and share it with hashtag #WaitingPoseForSooryavanshi. I would invite the coolest ones to pose with me in real. Jaldi karo, I am waiting,” he added to the caption. 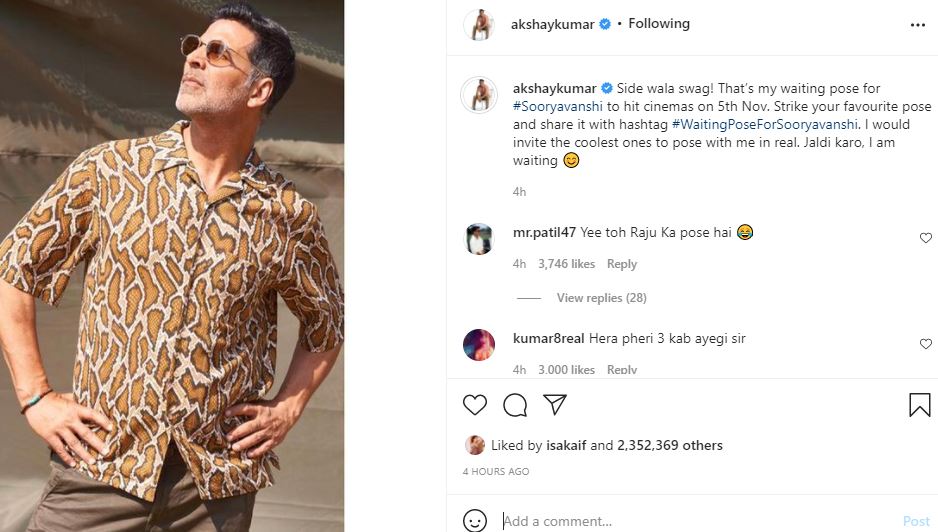 The post garnered more than 2 million likes within a few hours of being shared and that gives enough proof of ‘Raju’s separate fan base!

Fans of the star chimed to the comments section and filled the space with a string of messages.

One fan even asked Akshay about the tentative release date for the third part of ‘Hera Pheri’ saying, “Hera pheri 3 kab ayegi sir.”

Speaking about the much-anticipated action entertainer ‘Sooryavanshi’, the movie is all set to release in the theatres on November 5.

Directed by Rohit Shetty, the cop drama was originally slated to release on March 24 last year but was delayed due to the COVID-19 pandemic, which led to the shutting down of cinema halls.

‘Sooryavanshi’ is a continuation of the cop action ‘Singham’ universe, which began with the Ajay Devgn starrer ‘Singam’ and ‘Singham Returns’, then expanded with ‘Simmba’, starring Ranveer Singh and Devgn, and now is going forward with Akshay’s character.

In ‘Sooryavanshi’ Akshay will be seen portraying the role of a DSP who fights crime. Katrina will be playing the role of Akshay’s love interest in the film.
The movie will also feature special cameos by Ajay Devgn (Singham) and Ranveer Singh (Simmba). (ANI)