Mumbai (Maharashtra) : After the massive success of the first season of ‘Aarya’, Sushmita Sen is back, reprising her role as Aarya Sareen, who is returning to combat her worst demons in the second season.

Taking to her Instagram handle, the actor shared the first look teaser, revealing her intense look from the next season.

In the video, Sushmita looks ferocious, covered in raging red colour. The teaser brings back the lioness, fighting the odds to save her family.
She added a caption, “#firstlook. Literally #AARYA2. Sherni is back! This time, deadlier than ever! Aarya’ll ready?” 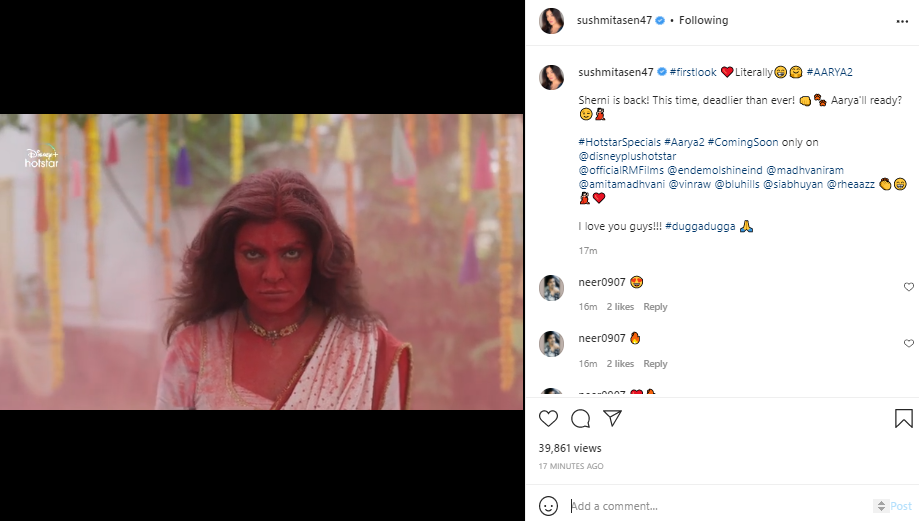 Created by Ram Madhvani, the International Emmy nominated action drama series promises viewers a thrilling and spine-chilling watch as Aarya Sareen manoeuvres a grittier, darker journey.
Talking about returning with the second season, director Ram Madhvani said, “The love and appreciation we got post the release of the first season was heartwarming and it made us want to create the second season with all the more love and labour. The show’s nomination in the Best Drama category at the International Emmy Awards reaffirms our faith in the story we set out to tell.”
He further talked about Aarya’s character in the second season.

“I am thrilled to take fans of the show on the next step of Aarya’s journey. She faces challenges every step of the way as she is forced to walk a fine line between keeping her family alive and seeking revenge,” he added.

‘Aarya’, an official remake of the popular Dutch crime drama ‘Penoza’, revolves around Aarya Sareen (Sushmita) who is a caring mother and a loving wife. She is quite simplistic in her approach and is unaware of the illegal business her husband is a part of. However, things go bad for their family after Aarya’s husband Tej Sareen (Chandrachur Singh), a pharma baron, is mysteriously killed.

The whole drug operation and illegal syndicate seek the death of his entire family. Seeing this, Aarya joins the gangs and becomes the Mafia queen and seeks revenge from those who killed her husband. In this process, she also takes care of her three kids.