MUMBAI: By sharing a couple of unique artworks dedicated to her by fans, actor Shraddha Kapoor who recently signed a trilogy titled ‘Nagin’ on Tuesday penned a note of gratitude.

The ‘Stree’ star took to Instagram and shared sketches made by fans across the globe. These artworks feature a painted and digitised version of Shraddha as a Nagin and the overwhelming love continues to grow as the final look and poster of the actor is being awaited by the fans.

The ‘Aashiqui 2’ star recently shared her favourite fan-made versions of Nagin on social media with the caption, “Sharing a few of the many mind-blowing artworks and edits that you all have created with so much effort and love for #NAGIN They’ve made my heart overflow with gratitude Thank you guys so much.” 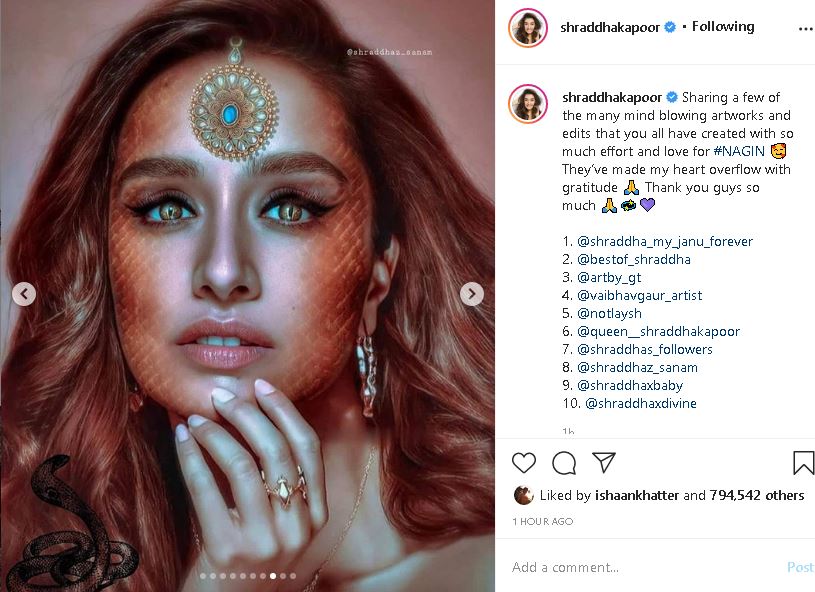 The ‘Baaghi’ actor also gave credits for the hard work that each fan has put into making the artworks.

Kapoor has been on a roll with back to back releases and delivering a brand new avatar in every project she’s a part of and her upcoming film ‘Nagin’ will showcase Shraddha in a never before seen character. Besides, the ‘Saaho’ star has become the first actor in Bollywood to portray the lead in a trilogy.

From ‘Street Dancer 3D’ to ‘Baaghi 3’ to Nagin, the actor has had a busy year. During the lockdown period, Kapoor spent her time in lockdown by reading scripts and also announced her next with Ranbir Kapoor followed by ‘Nagin’ trilogy. (ANI)