‘Seeti Maar’ from Salman Khan-starrer ‘Radhe: Your Most Wanted Bhai’ to release soon

New Delhi: After the recent trailer launch of the Salman Khan-starrer ‘Radhe: Your Most Wanted Bhai’, actor Disha Patani, who plays the female lead in the upcoming movie announced that its first song ‘Seeti Maar‘ will be releasing soon.

The 28-year-old actor took to her Instagram handle and shared the cover art of the movie’s first song, featuring a silhouette of her, along with the caption, “Turn up the volume, aur ho jao tayaar, Kyunki ab aayega, Radhe aur Diya ka #SeetimaarOutSoon.” 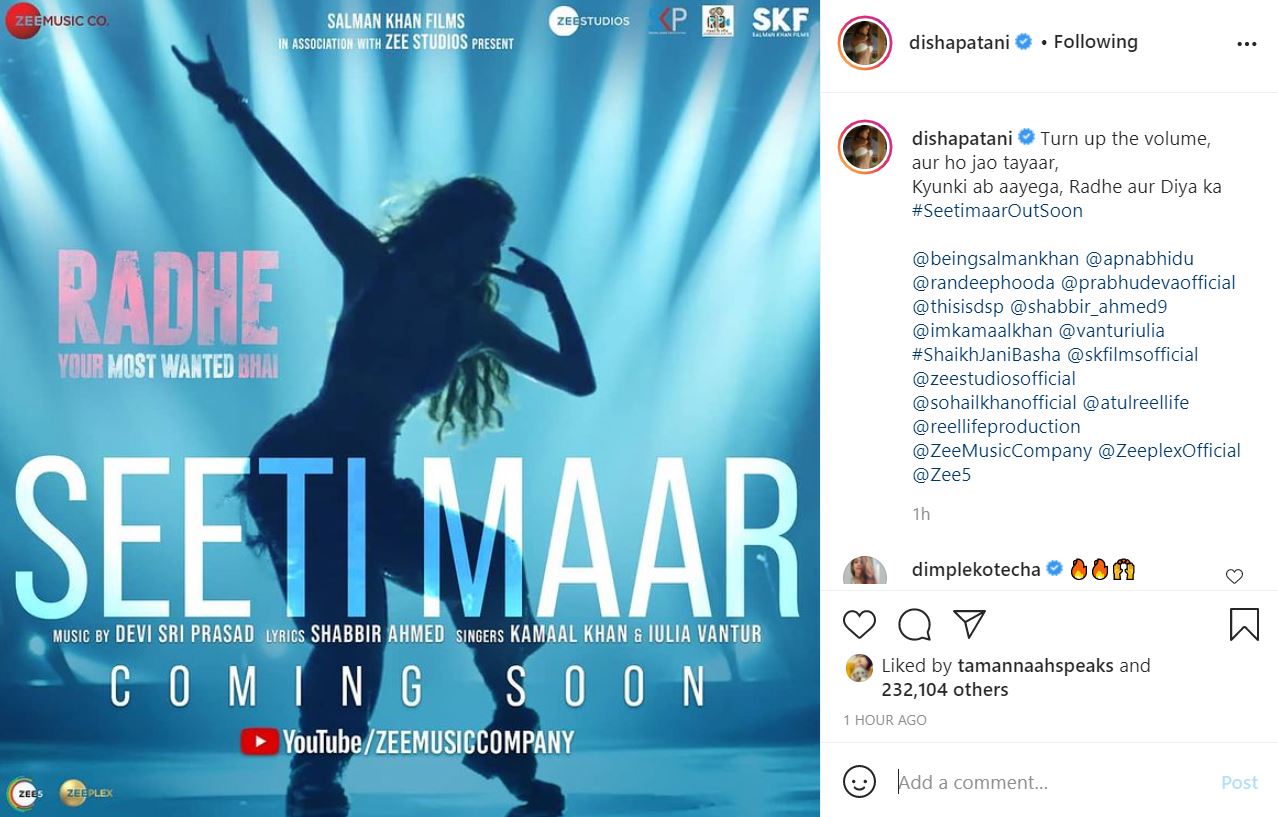 The song ‘Seeti Maar‘ is reportedly an official remake of the original number that sees Allu Arjun and Pooja Hegde grooving to its beats. The music of the new track has been composed by Devi Sri Prasad, and lyrics have been penned by Shabbir Ahmad. Kamaal Khan and Iulia Vantur are the vocalists with Shaikh Jani Basha as the choreographer of the song.
Taking the internet by storm, the trailer of ‘Radhe: Your Most Wanted Bhai’ had shattered all records with over 30 million views within 12 hours of its release on YouTube.

The trailer gave audiences a glimpse of everything that’s in store including adrenaline-pumping action sequences, signature one-liners, catchy music and dance moves that become nationwide trends and drove the digital platform into a frenzy.
Interestingly, while it became the fastest Bollywood trailer to reach 100k likes in a record time of 10 minutes, it is also the first Indian film to have a multi-format release.

The film will be released on ZEE’s pay-per-view service ZEEPlex which rests on India’s leading OTT platform ZEE5 and also on all leading DTH operators. The actor, along with his studio partner Zee Studios, have opted for this hybrid release model given the rise in coronavirus cases across the country.

The action flick by the Yash Raj Films banner, directed by Prabhudeva, was earlier scheduled to release on Eid 2020, but it could not see the light of the day due to the closing of film theatres owing to coronavirus-induced lockdown.