Priyanka and Nick’s anniversary wishes will warm your heart The Hollywood singing sensation, Nick who tied the knot in an elaborate ceremony at Jodhpur, Rajasthan, penned a heart-warming post, expressing his love for wife and global star Priyanka.

“One year ago today we said forever,” the singer captioned a breathtaking snap, featuring the two of them holding hands before a flower-adorned altar on their special day.

“Well forever isn’t nearly long enough. I love you with all of my heart @priyankachopra happy anniversary,” he added. 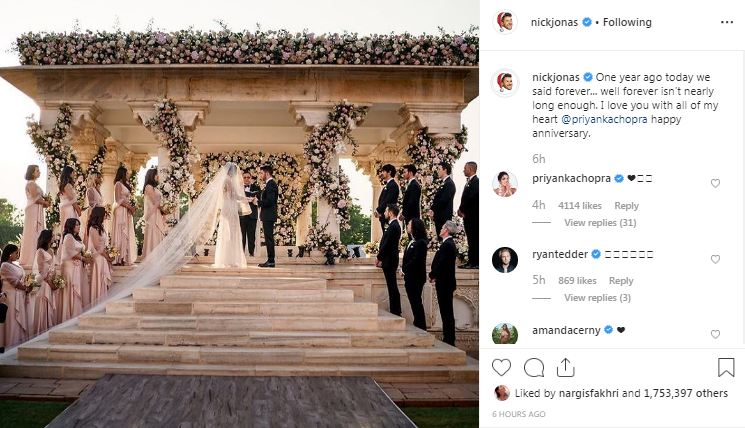 The ‘Baywatch’ actor too expressed adoration for her husband, in a separate post which showcased highlights from their wedding ceremony.

“My promise. Then..today.. forever. You bring me joy, grace, balance, excitement, passion.. all in the same moment…thank you for finding me.. Happy First wedding anniversary Husband.. @nickjonas,” she wrote. 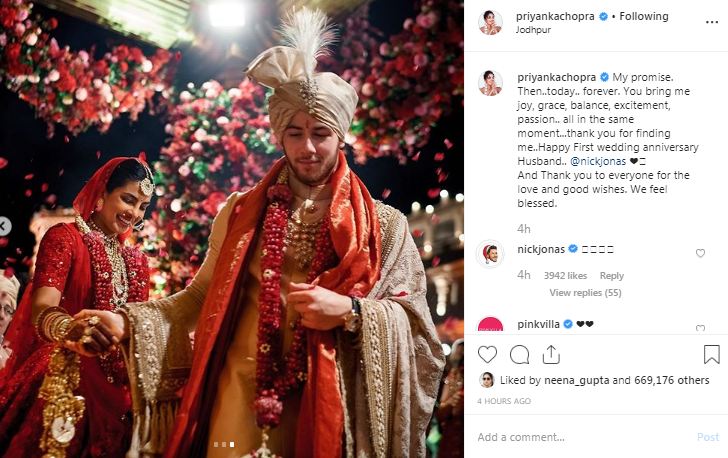 Priyanka and Nick got married in two elaborate ceremonies– as per Christian tradition on December 1, 2018 in Jodhpur’s Umaid Bhawan Palace and as per Hindu rituals on December 2 at the same venue.

Continuing the celebration, the duo then hosted a wedding reception in Delhi – which was also attended by Prime Minister Narendra Modi.

Post that Priyanka’s mother Madhu Chopra threw a party for their close friends and family. They also hosted a wedding reception bash in Mumbai on December 20 which was attended by the who’s who of Bollywood.

On the work front, the 37-year-old actor was recently shooting for her next ‘The White Tiger’ in the national capital wheras Nick successfully wrapped up his ‘Happiness Begins’ tour along with his brothers, Kevin and Jo, which started in August in Miami, Florida. (ANI)