NEW DELHI: On the first death anniversary of former external affairs minister, Sushma Swaraj, Prime Minister Narendra Modi remembered her as an articulate voice for India at the world stage, on Thursday.

“Remembering Sushma Ji on her first Punya Tithi. Her untimely and unfortunate demise left many saddened. She served India selflessly and was an articulate voice for India at the world stage. Here is what I had spoken at a prayer meet in her memory,” the PM tweeted on Thursday, sharing a video of his speech from a prayer meeting that was held after her demise last year. 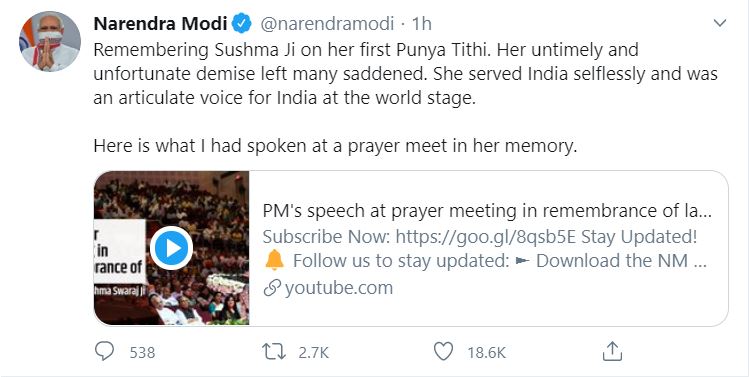 Earlier in the day, several other political leaders also tweeted in honour of the late Union minister.

Swaraj passed away on the night of August 6 following a cardiac arrest. Thousands bid adieu to their late minister as she was laid to rest with full state honours. (ANI)