New Delhi: Prime Minister Narendra Modi on Wednesday mourned the demise of veteran actor Arvind Trivedi, who was widely known for his portrayal of Raavan in the hit mythological TV series ‘Ramayan’.

The actor died of a heart attack on Tuesday night. He was 82 when he breathed his last.

PM Modi shared a moving tweet in the beloved memory of the actor. He wrote, “We have lost Shri Arvind Trivedi, who was not only an exceptional actor but also was passionate about public service. For generations of Indians, he will be remembered for his work in the Ramayan TV serial. Condolences to the families and admirers of both actors. Om Shanti.” 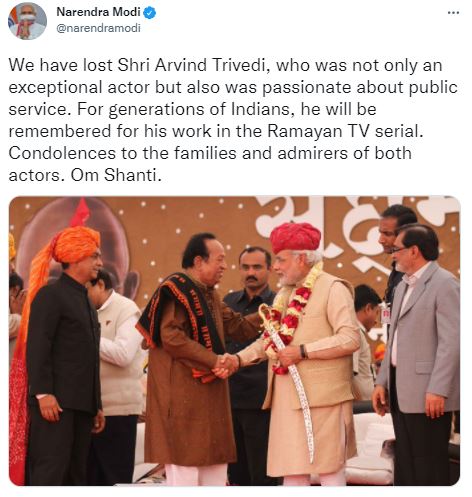 The actor, who was keeping unwell and was even unable to walk, passed away in Mumbai. Arvind’s last rites were performed on Wednesday, around 8 am.
Apart from playing the iconic character of Ravan in ‘Ramayan’, Arvind had also played a key role in the hit TV show ‘Vikram Aur Betaal’.
The late star had a prolific career spanning more than three decades in the Gujarati cinema. ‘Desh Re Joya Dada Pardesh Joya’ remains one of the most popular Gujarati films of all time.
Apart from his acting stints, Arvind also dabbled in politics by serving as a Member of Parliament from 1991 to 1996. For a brief period, between 2002 and 2003, the late actor had also served as an acting chairman for the Central Board for Film Certification (CBFC). (ANI)