Parineeti Chopra’s look from ‘The Girl on the Train’ will give you goosebumps!

New Delhi: Known for her bubbly nature, Parineeti Chopra’s first look from her upcoming film ”The Girl On The Train’ will leave you all shocked and shaken.

The 30-year-old actor shared her look on Instagram where she can be seen drenched in blood with scars and bruises on her face.

She can be seen sitting naked in the bathtub with an expression of shock on her face. Judging by the first look and Parineeti’s expression, it seems that the film is going to be grungy and intense. 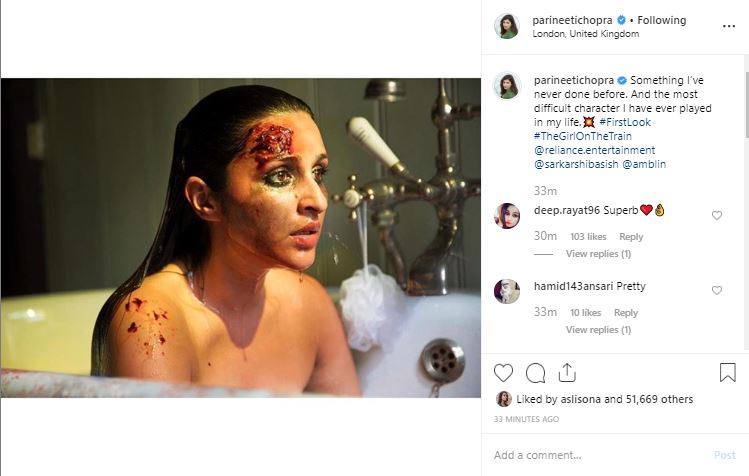 Some time back, the actor who was really excited about the film, shared a picture on Instagram where she was seen describing her role in the film.

“So. We’ve started shooting for Girl On The Train in London. It’s my MOST difficult role to date; I feel like I’m in a hostel, with no time (or headspace) for social media or chilling or doing anything else,” she wrote alongside a breezy and fresh picture of her from the sets of the film.

She even got a new hair colour before stepping into the shoes of the film.
Her upcoming feature is based on Paula Hawkins’ 2015 bestseller, ‘The Girl On The Train’ which was adapted into a Hollywood film by Steven Spielberg’s DreamWorks Pictures.

As per media reports, Parineeti will play an alcoholic divorcee, who gets involved in a missing person’s investigation in the film.

The Ribhu Dasgupta’s directorial is slated to hit the theatres in 2020.
Meanwhile, Parineeti was last seen in ‘Jabariya Jodi’ alongside Sidharth Malhotra which fared less at the box office. She will also be seen next in Saina Nehwal biopic where she will be seen playing the role of the ace shuttler. (ANI)