Washington: Grab a box of tissues as singer-songwriter Miley Cyrus is celebrating the 15th anniversary of her iconic show ‘Hannah Montana’ and in honour of the special day, she posted a handwritten letter to her character on social media.

On Wednesday, the 28-year-old pop star penned a love letter to her breakout character. Cyrus became a household name when the show made its debut on the Disney Channel in 2006.

“Hi Hannah, It’s been a while. 15 years to be exact. Since the first time I slid those blonde bangs over my forehead in the best attempt to conceal my identity. Then slipped into a puke pink terry cloth robe with a bedazzled HM over the [heart]. I didn’t know then…that is where you would live forever,” Cyrus wrote in the note, shared on Twitter and Instagram.

“Not just in mine but millions of people around the world. Although you are considered to be an “alter ego” in reality there was a time in my life when you held more of my identity in your glovette than I did in my bare hands,” she added.

In the heart-touching letter, Cyrus went on to share her journey from singing ‘I Love Rock ‘N Roll’ in a friend’s Nashville kitchen to Hollywood — and the highs and lows that came along with it.

“We’ve shared many firsts. A lot of lasts. Ups. Downs. Tears + laughs. I lost my pappy my Dads father while on set filming an early episode of season 1. He wanted to hold on long enough to catch the premier on March 24th. He passed February 28th. He did get to see the commercial that ran during High School Musical which he claimed was one of the proudest moments in his lifetime + he was a badass democratic state legislature. My heart was broken but fulfilled to know I could carry his name beside my dads through every credit,” Cyrus wrote.

She also thanked her family, both on-screen and off, including her father and co-star Billy Ray Cyrus, mother Tish, maternal grandmother Loretta and her siblings.

“I experienced falling in love for the first time in those years. Embarrassingly started my period in a pair of white capris of course on the day a ‘cute guy’ was cast + asked to have lunch with me. Instead I spent it in the bathroom with my mom sobbing + scrambling to find a pair of fresh denim,” Cyrus added.

She further said, “I gained so many friends over the 6 years spent onset. Emily Osment, Mitchel Musso + Jason Earles became my family. I was seeing them more than my own. Well besides my dad who I drove to work with everyday until my mom let me buy a Prius. Which then I was only 15 with a permit so my co-pilot was my grandmother ‘Mammie’ who ran my fan club MileyWorld out of the dressing room kitchen I shared with my dad.”

Cyrus went on to express her gratitude for the team at Disney, as well as the cast and crew, and the character of Hannah herself.

“Not a day goes by I forget where I came from. A building in Burbank, California with a room full of people with the power to fulfill my destiny. And that they did. They gave me you. The greatest gift a girl could ask for. I love you Hannah Montana,” Cyrus concluded, signing off: “Forever, Miley.” 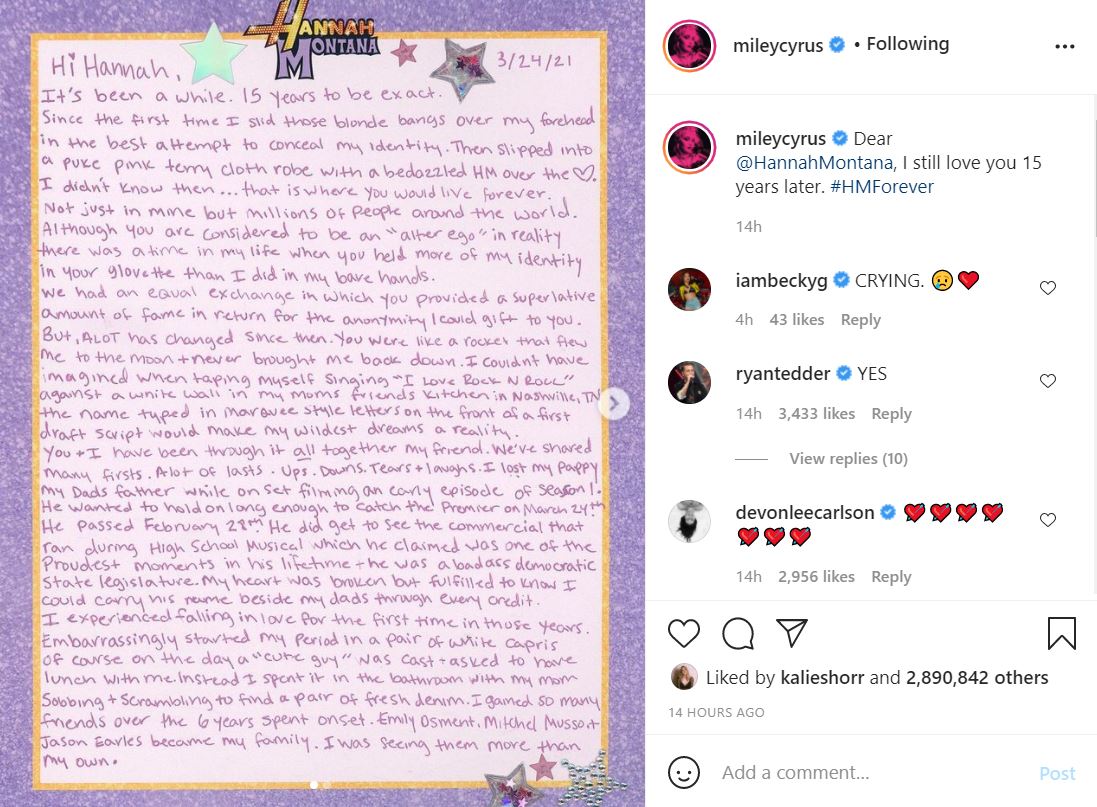 The official Hannah Montana Twitter account responded to the letter, saying, “Nice to hear from you @MileyCyrus. It’s only been a decade.” 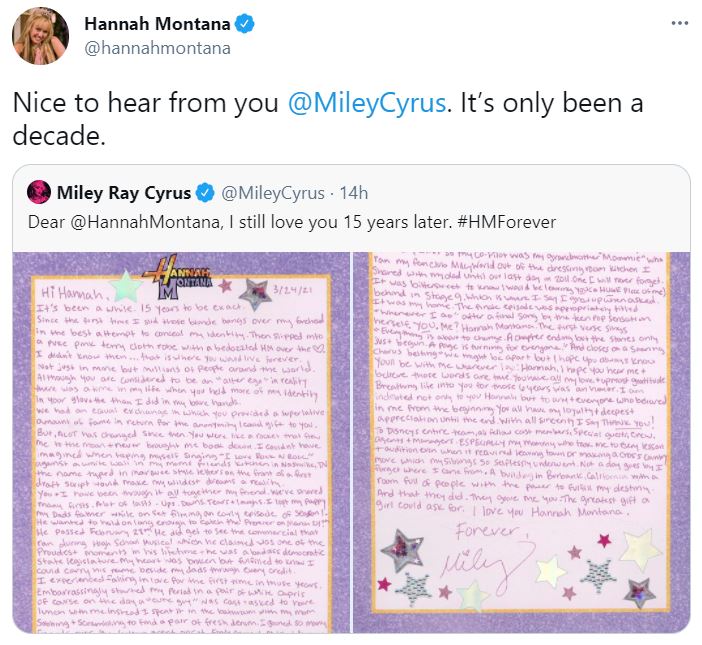 ‘Hannah Montana’ ran on the Disney Channel from 2006 to 2011, and a star-studded film ‘Hannah Montana: The Movie’ was released in theaters in 2009. Since the show’s debut, Cyrus has released seven full-length albums. Her most recent, last fall’s ‘Plastic Hearts’ topped the Billboard Top Rock Albums chart. (ANI)