New Delhi: The Badshah of Bollywood, Shah Rukh Khan, has added yet another feather in his cap.

The actor was conferred with an honorary doctorate on Friday by the La Trobe University in Melbourne for his work supporting women’s empowerment and his achievement in the Indian entertainment industry.

Named after his mother, Khan’s Meer Foundation is best known for its work helping acid attack survivors who are victims of usually jealous or scorned men.

Khan, who received the degree for his humanitarian work, thanked the university. “I am deeply grateful to La Trobe University for its graciousness in offering scholarships for the education of young women from my country. I doff my hat a million times to you!” said SRK, according to the official twitter handle of La Trobe University. 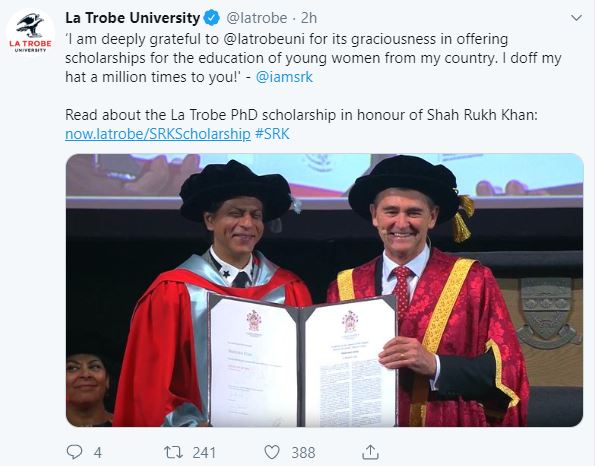 Clad in red and silver robe SRK said, “This is not an award for anything the Meer Foundation might have achieved. It is for the courage of every woman who faces the brutality of injustice, inequality, and inhumanity.” 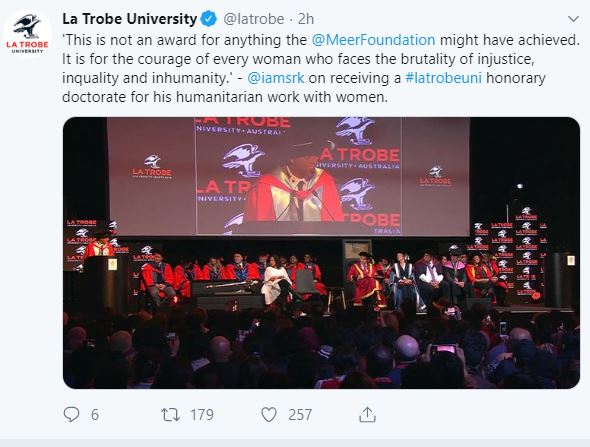 Shahrukh who wore a tan and taupe colour three-piece suit during the event also took to social media to thank the University.

“On the way to La Trobe University… Thank you for the kind gesture of offering a scholarship to a girl student from India for higher education and supporting the work at meer foundation official,” tweeted the actor.

On the work front, Shahrukh was last seen in Anand L Rai’s ‘Zero’ opposite Anushka Sharma.

Other than this, he along with his son, Aryan dubbed for the Hindi version of ‘The Lion King’. While he voiced Mufasa, his son dubbed for Simba. The film had released on July 19. (ANI)