New Delhi: As ‘Kal Ho Naa Ho’ clocked 16 years, director Karan Johar shared his love for the movie, which is close to his heart.

Starring Shah Rukh Khan, Preity Zinta and Saif Ali Khan, the film was written by Karan Johar, who co-produced it with his father Yash Johar under their Dharma Productions banner.

Taking to Instagram, Karan shared the poster of the movie with a caption that reads, “A love of a lifetime within a heartbeat! A film very close to my heart completes 16 years”!! #16YearsOfKalHoNaaHo @iamsrk @realpreityzinta #SaifAliKhan @nikkhiladvani @apoorvamehta18 #KalHoNaaHo 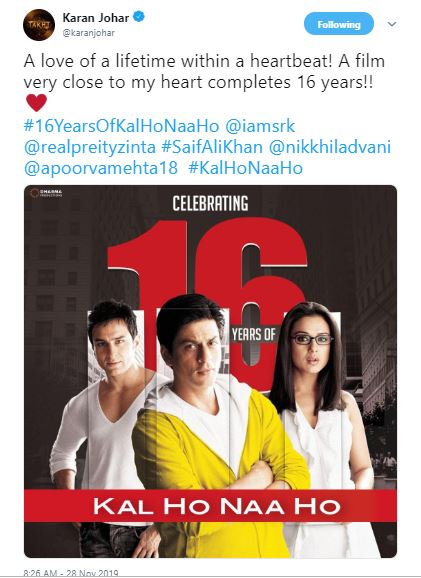 ‘Kal Ho Naa Ho’ is a romantic drama film directed by Nikkhil Advani. The plot of the movie revolves around Naina Katherine Kapoor (Preity Zinta) who is an MBA student in New York. She falls in love with her neighbor Aman Mathur (Shah Rukh Khan), a terminally ill patient who tries to get Naina and her friend Rohit Patel (Saif Ali Khan) to fall in love with each other since he fears she will grieve for him if he reciprocates her feelings.

The movie was released on 27 November 2003, with the promotional tagline “A Story of a Lifetime … In a Heartbeat”. (ANI)