Amazon Prime Video took to Instagram on Monday and announced the digital premiere of the recently released film.
They wrote,”@TheJohnAbrahamv/s @emraanhashmi Whose side are you on? The chase begins tonight, watch #MumbaiSagaOnPrime.” 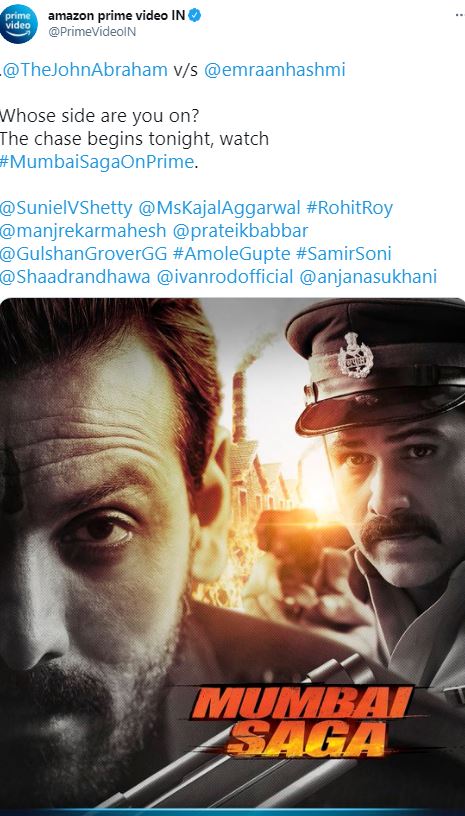 The plot of the film chronicles a fictional story of the duel between Amartya Rao (John Abraham) and Senior Inspector Vijay Sawarkar (Emraan Hashmi) that explores different tangents of hopes, aspirations, friendships and betrayals against the backdrop of Mumbai in the early 90s. However, ‘Mumbai Saga ‘is a tale of the Bombay that it was and the Mumbai that it became.

Talking about the digital release of the film, the ‘Force’ actor said, “The movie released in cinema halls this March and I am delighted with the response from fans who watched the movie. Mumbai Saga will now premiere on Amazon Prime Video and this feeling of sharing our hard work across the world is amazing. Mumbai Saga is my third project with Sanjay after having worked together on Zinda and Shootout at Wadala.”

“I absolutely love working with him as I believe he brings out the best in me and more importantly, he understands the pulse of the audience and delivers films that are loved by them. Mumbai Saga is an out and out entertainer, the audiences will enjoy. I essay the character of Amartya Rao, a gangster, which is very different from the ones I have done in the past. It was a delight to work alongside Emraan for the very first time. We shared some great moments on the set while shooting for the film,” he added.

Speaking about his collaboration with Sanjay Gupta for the first time in ‘Mumbai Saga’, the ‘Murder’ star said, “I am thrilled to announce the digital premiere of Mumbai Saga on Amazon Prime Video. Mumbai Saga is very close to my heart.”

“Vijay Savarkar’s character, while being a cop, has some grey shades to it, and that’s something that excited me to take this role on. Sanjay is a prolific director who has created the most iconic action films in Indian cinema, and I was thrilled when he approached me to take on this powerful role,”said Hashmi.