NEW DELHI: Former India all-rounder Yuvraj Singh on Wednesday wished and current CCI president Sourav Ganguly on his 48th birthday, saying his former captain is the undisputed ‘Dada’ of the Indian cricket.
Yuvraj made his debut in the Indian cricket under the captaincy of Ganguly and went on to achieve several accolades for the Men in Blue.
Taking to Twitter Yuvraj wrote, “Happy Birthday to the undisputed Dada of Indian Cricket. You have always led from the front, showing us what it means to be a true leader. I have learnt a lot from you & hope to become to others what you are to me. You are our eternal captain @SGanguly99 #HappyBirthdayDada.” 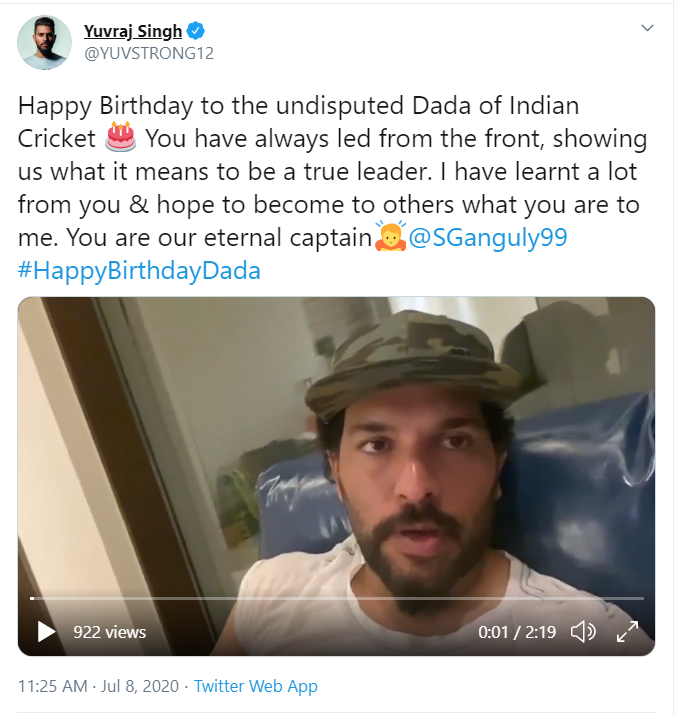 Yuvraj also posted a video along with the post for his dear and eternal captain, saying ‘it has been a great journey under you’.
“This message is for our dear and eternal captain, Sourav Ganguly. Dada, it’s your birthday. It’s been a great journey under you. You were my biggest support. All of us youngsters needed the support in the start,” said Yuvraj.
“Thank you for that. I remember when you gave me the BCCI acknowledgment trophy for playing 300 ODIs in Edgbaston, I told you that day that without your support, this wouldn’t have been possible. When you got familiar with me, Viru, Bhajji, Zak, Nehra, we played a lot of pranks on you,” he added.
He recalled when Harbhajan Singh planned a prank on Ganguly during an away series against Pakistan.
“We were playing against Pakistan once. A day before was April Fool’s day. We made a fake Times of India newspaper – it was Bhajji’s idea. We wrote fake quotes and credited you. I remember you said that you would resign if you had said something like this,” he said.
“Rahul (Dravid) patted your shoulders, and said Happy Fool’s day. But you already had a fair idea on who could’ve pulled this prank, so you ran straight towards me and Bhajji!” recalled Yuvraj.
He also mentioned the famous final match from the 2002 NatWest series, when Sourav Ganguly removed his t-shirt after India beat England.
“In 2002, you removed the t-shirt in Lord’s balcony. I haven’t seen any cricketer flaunt a body like that. Thank god you haven’t removed a t-shirt since! I remember, even Ashu was trying to remove his t-shirt, but Rahul asked him not to. So, great sense knocked by seniors to juniors,” said Yuvraj.
The former skipper played 113 Tests and 311 ODIs for India. The left-handed batsman scored 18,575 runs across all formats in his international career.
Ganguly had led India in 195 matches across all formats and managed to win 97 matches out of those.
The Prince of Kolkata later went on to become the president of the Cricket Association of Bengal (CAB) and now has been appointed as the president of BCCI in October last year.
Ganguly played a key role in pushing the idea of day-night Test cricket in India. His efforts paid off as India played its first-ever day-night Test match against Bangladesh at Eden Gardens in 2019. (ANI)