Washington: Film score composer Hans Zimmer on Friday (local time) announced the release of his new single ‘Open Road’ which will be featured in the upcoming film ‘Wonder Woman 1984’.

The Oscar-winning composer took to his Twitter account and shared the news with the caption “It’s #WeekOfWonder and I have a new track to share with you to celebrate! Listen to my newest single “Open Road” featured in @WonderWomanFilm here: http://lnk.to/WW1984OR. #WW84 is only two weeks away from being in theaters and on @HBOMax in the U.S.!” 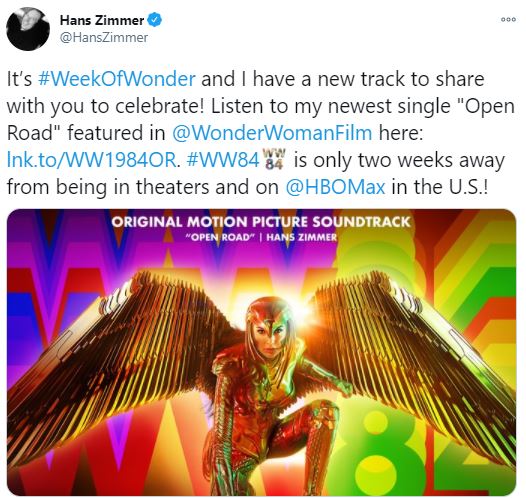 He won the ‘Best Original Score’ Oscar for the film ‘The Lion King’ back in 1995. Hans, who is no stranger to the world of the superhero genre, has previously composed film-score for superhero movies like ‘Man of Steel’, ‘Batman Trilogy’, ‘Amazing Spider-Man’, ‘X-Men: Dark Phoenix’ among others.

He will now compose the music for the second installation of the franchise ‘Wonder Woman 1984’. The much-awaited film has secured a Christmas release date in several countries, while it will hit the Indian theatres a day earlier on December 24. (ANI)