Although neither star appeared to accept their award during the Grammys ceremony, Grande hilariously reacted to their win on Twitter.

“MOTHER MONSTER WAKE UP @ladygaga!!!!!!!!???” Grande tweeted, tagging Gaga, who is in Italy filming the upcoming movie ‘House of Gucci’. 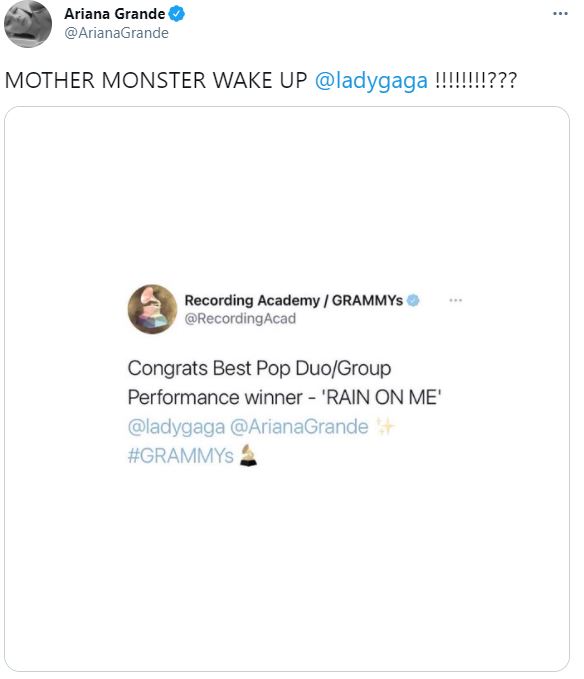 She added in a second tweet, “eternally, deeply grateful for u, for this experience, to have been a part of this song and this celebration of healing and recovery, to be able to dance in the rain with u, to call u my dear friend & to now share this. beyond thankful. congratulations queen, ti voglio bene.”

Then, Grande followed up with a meme of Gaga from a live stream where the ‘911’ singer appeared to be sleeping during an Instagram Live.

Other nominees in the category included J Balvin, Dua Lipa, Bad Bunny and Tainy for ‘Un Dia (One Day),’ Justin Bieber and Quavo for ‘Intentions,’ BTS for ‘Dynamite’ and Taylor Swift with Bon Iver for ‘Exile.’

With this win, Gaga becomes the only star to take home the award more than once. She also took home the trophy for ‘Shallow’ with Bradley Cooper in 2019. Gaga and Grande also made history, becoming the first two women to win together in the category.

Gaga is up for best pop vocal album for her March 2020 LP Chromatica, which served as a triumphant return to her dance-pop roots.

The 63rd Annual Grammy Awards were delayed owing to the ongoing Covid-19 pandemic. The annual show shifted from its original January 31 broadcast to March 14.
The ceremony honours musical artists, compositions, and albums across 84 categories.

Though usually held at the Staples Center, this year’s festivities will take place at the Los Angeles Convention Center. (ANI)