Ganguly wore his heart on his sleeve, says VVS Laxman New Delhi : Former India batsman VVS Laxman on Tuesday hailed the leadership qualities of Sourav Ganguly and said that the ‘Prince of Kolkata’ wore his heart on his sleeve.

Laxman shared a photo of Ganguly as part of his initiative of paying tribute to his teammates who influenced him immensely.

“Unconventional and fiercely proud, @SGanguly99 wore his heart on his sleeve. And, sometimes, bared it too! Empowering youngsters who went on to do wonders for the country was a credit to his great leadership qualities,” Laxman tweeted. 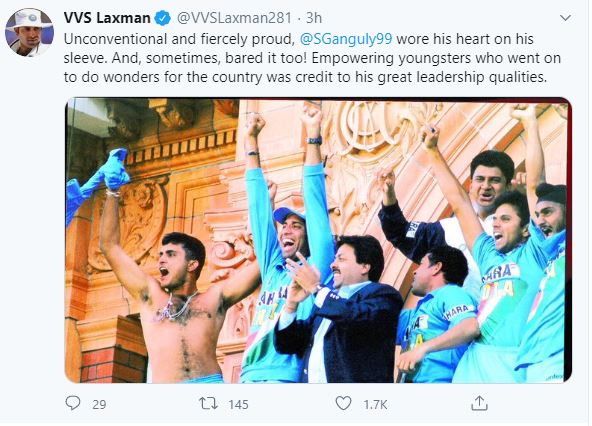 Laxman shared the photo of Ganguly from the 2002 Natwest finals against England where India managed to stun the hosts and after that Ganguly decided to take off his shirt and celebrate in style at the Lord’s balcony.

Over the years, Ganguly went on to become one of the most successful Indian skippers.

Under his leadership, India defeated Pakistan in Pakistan for the first time in a Test series.
He also guided India to the finals of the 2003 Cricket World Cup.

Ganguly played 113 Tests and 311 ODIs. The swashbuckling left-handed batsman scored 18,575 runs across all formats in his international career.

In October 2019, Ganguly became the president of the Board of Control for Cricket in India (BCCI). (ANI)