Washington D.C.: Actor Gal Gadot on Saturday announced the new release date for her much-anticipated movie ‘Wonder Woman 1984’. The superhero flick, which was earlier slated to hit the screens on August 14, has been pushed to October 2.

Gadot shared the information on Twitter and also thanked fans for being supportive throughout. 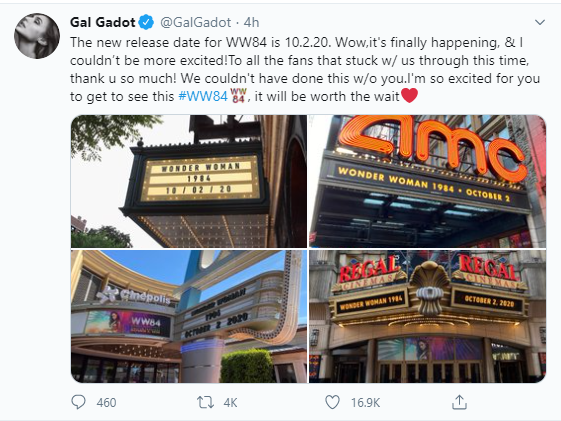 Directed by Patty Jenkins, the film is the second installment of the 2017 DC movie ‘Wonder Woman,’ and will see Gadot in the titular role.

The shift from August to October marks the third release date change for the tentpole.

The sequel had originally been set to hit theaters in November 2019, but the studio moved it to early June of this year to take advantage of the summer movie season.

However, the coronavirus crises disrupted those plans after cinemas closed in mass in the latter part of March.

Solstice Studios has said it is pushing the road-rage thriller ‘Unhinged’, starring Russell Crowe, from July 1 to July 10.

A slew of Hollywood movies, lately, have seen release date changes, including the announcement of Tom Hanks ‘Bios’, cited The Hollywood Reporter.

The ‘Forrest Gump’ actor’s sci-fi adventure movie has relocated its date of release from October 2, to April 16, 2021. (ANI)