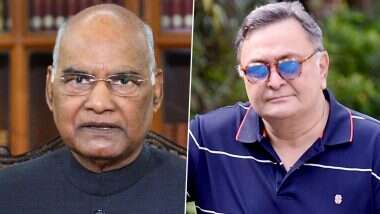 New Delhi: President Ram Nath Kovind on Thursday condoled the demise of veteran actor Rishi Kapoor and said that he was an “evergreen personality with an always smiling face”.

“Rishi Kapoor’s untimely demise is shocking. An evergreen personality with an always smiling face, he was so full of life that it’s difficult to believe that he is no more. A huge loss for the entertainment industry. Let us pray for his soul. Condolences to his family and friends,” read a post on the official Twitter handle of President of India.

According to a statement issued by his family, Rishi Kapoor passed away peacefully at 8:45 am in hospital on Thursday after a two-year battle with leukemia.

“The doctors and medical staff at the hospital said he kept them entertained to the last.
He remained jovial and determined to live to the fullest right through two years of treatment across two continents. Family, friends, food and films remained his focus and everyone who met him during this time was amazed at how he did not let his illness get the better of him,” the statement read.

Vice President M Venkaiah Naidu also took to Twitter and wrote, “Deeply saddened to learn about the demise of veteran Hindi film actor, Rishi Kapoor. The talented actor essayed many roles with aplomb and was popular for his romantic films. In his passing away, the nation lost a beloved son and film industry lost a gem.”

He added, “I convey my condolences to the bereaved family members, friends and legions of his fans across the country. May his soul rest in peace.” (ANI)