Bengaluru (Karnataka): Asserting that India has to focus on new goals for new India, Defence Minister Rajnath Singh on Wednesday said the Defence Research and Development Organisation (DRDO) is continuously developing technology that will help the country in achieving these goals.

“Today, when the world is changing so fast and a new world order is emerging in front of us. We have to focus on new goals for our new India, I am happy to see that the DRDO is continuously developing technology that will help us in achieving these goals,” Singh said in Bengaluru at Aero India 2021.

“It is in pursuit of these goals that we had many successful trials recently like Akash NG Missile, Anti-Radiation Missile-RUDRAM and MRSAM. In many of our tests, we have got success in our maiden attempt itself, this is our great achievement,” he added.

Commenting on the recent decision of induction of 83 TEJAS into Indian Air Force (IAF) by the government and the successes of indigenously developed systems like bombs, radars sonar, communication systems and armaments, he said the induction reflects the role of DRDO towards self-reliant India.

“I have come to know that last year, 225 Licenses Agreements were signed by DRDO with industry. This shows the industries’ trust in homegrown technologies developed by DRDO,” he said.

Meanwhile, the BrahMos supersonic cruise missile was also displayed at the event in coastal defence role. Indian Navy is going to induct the missile as part of the Next Generation Maritime Marine Coastal Defence battery role.

“We have already demonstrated the underwater launch capability of the BrahMos missile. Whenever the Indian Navy makes submarines indigenously, I am 100 per cent sure that the BrahMos submarine-launched version would be equipped on it,” BrahMos DG Sudhir Mishra told ANI.

American B-1B Lancer aircraft also took part in the show. The aircraft flew from an American airbase in South Dakota, United States for over 26 hours to reach the city. 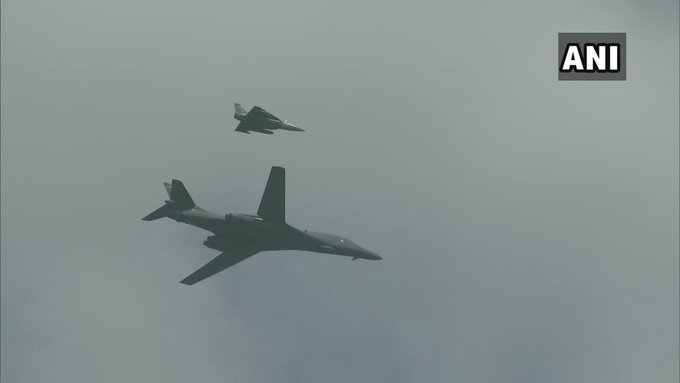 Moreover Singh was briefed by a Hindustan Aeronautics Limited (HAL) official about the VIP version of an indigenous chopper at the show. (ANI)