Demi Lovato announces new album ‘Dancing With the Devil: The Art of Starting Over’

Washington: American singer-actor Demi Lovato is soon going to treat her fans to some fresh music. The star on Monday revealed details about her new album ‘Dancing With the Devil: The Art of Starting Over’, including the release date of it.

The singer posted the cover of the album on her Twitter handle and wrote, “Dancing With The Devil The Art Of Starting Over #DWTDTAOSO Album out April 2!” 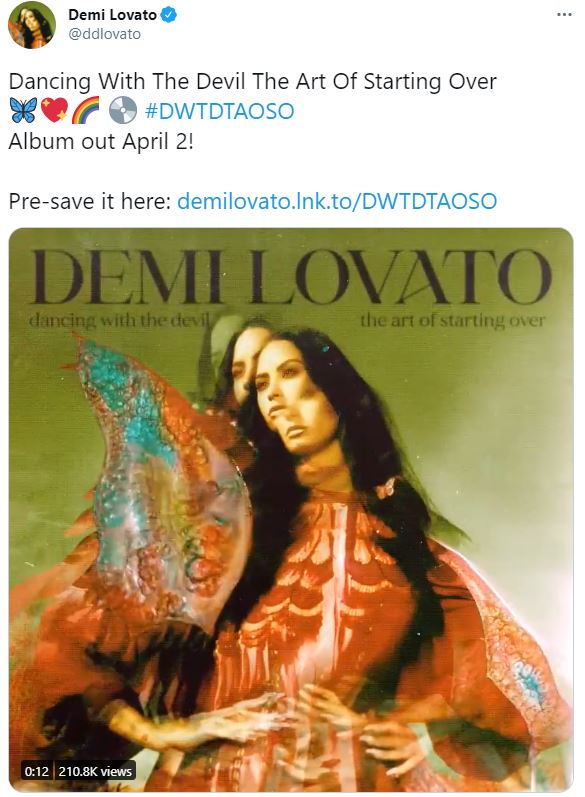 The album is set to release on April 2, this year. It will mark her first album after a long hiatus. As per Variety, during a livestream on Clubhouse Monday night, Lovato revealed that her first album since 2017 is titled ‘Dancing With the Devil… The Art of Starting Over’.

Lovato teased some details about the album, including the kind of music one could expect from it. Lovato described the album as a mashup of genres, including country, R&B, and ’90s pop.

She also revealed that the album will contain 19 tracks, with three bonus songs, and teased three collaborations on the record, one of which might be with singer Ariana Grande.

While talking about the title of the album, Demi revealed that it was initially called ‘The Art of Starting Over’, but then she decided to add ‘Dancing with the Devil’ to it in order to reflect the importance of her upcoming documentary of the same name.

“If you listen to it track by track, if you follow the tracklisting, it’s kind of actually like the non-official soundtrack to the documentary. Because it really does follow my life over the past couple of years,” Demi said.

“When we went through the track listing and kind of mapped out how it kind of coincided with my life’s story, it made sense to add the more emotional stuff in the beginning and then transition into ‘The Art of Starting Over,'” the ‘Camp Rock’ actor added.

The album would be a part of Demi’s upcoming documentary titled ‘Demi Lovato: Dancing With the Devil’ which will focus on the 28-year-old star’s struggle with addiction, particularly her 2018 overdose.

In the trailer for the documentary, released on February 17, Demi disclosed that she suffered three strokes and a heart attack after the 2018 overdose.

“I’ve had so much to say over the past two years wanting to set the record straight about what it was that happened. I’ve had a lot of lives,” Demi had said in the trailer.

The album ‘Dancing With the Devil: The Art of Starting Over’ will mark Demi’s first album release since 2017’s ‘Tell Me You Love Me’. In the meantime, the songstress has released many singles in collaboration with several high-rated musicians including Sam Fischer, Blackbear, All Time Low, and Marshmello.

Her forthcoming album will also be available as a four-part series on YouTube on March 23. (ANI)