‘Coolie No.1’, ‘Chhalaang’, ‘Durgavati’ among others to premiere on Amazon Prime Video Mumbai (Maharashtra) : After the direct-to-digital release of films like ‘Gulabo Sitabo’, ‘Shakuntala Devi’, Amazon Prime Video on Friday announced that it will be premiering nine more titles over the next few months. 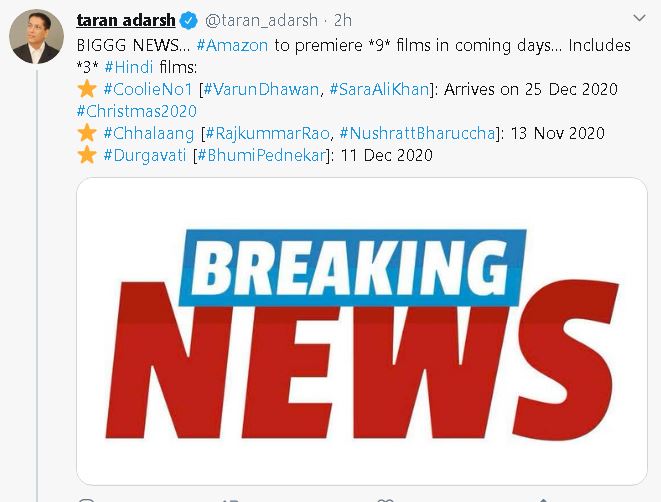 The online streaming platform will premiere nine movies, which would have hit cinema halls had they not been shut down due to the coronavirus pandemic.

Here’s a list of films, which have been acquired by the streaming platform:
The Varun Dhawan starrer comedy-drama Coolie No. 1 is scheduled to premiere on December 25 on Amazon Prime Video.

‘Coolie No. 1’ is a family comedy based on the popular franchise from Pooja Entertainment and is directed by the king of comedy David Dhawan. The film stars Varun Dhawan, Sara Ali Khan, Paresh Rawal, Javed Jaffrey, Johnny Lever, Rajpal Yadav amongst others and is produced by Vashu Bhagnani, Jackky Bhagnani and Deepshikha Deshmukh.

‘Chhalaang’ which is scheduled to premiere on November 13 on Amazon Prime Video.

‘Chhalaang’ is an inspirational social comedy starring Rajkummar Rao, Nushrat Bharucha and directed by Hansal Mehta. It is presented by Bhushan Kumar and produced by Ajay Devgn, Luv Ranjan and Ankur Garg.
Bhumi’s Durgavati is scheduled to premiere on December 11 on Amazon Prime Video.

Directed by Ashok, Durgavati is a thrilling, scary ride that tells the story of an innocent Government officer who is made the victim of a major conspiracy involving powerful forces. The film is presented by T-Series and Cape of Good Films and is an Abundantia Entertainment production. (ANI)