Guwahati: Filmmaker Ayan Mukerji, who has directed Alia Bhatt and Ranbir Kapoor-starrer Brahmastra’, on Wednesday confirmed the couple’s upcoming rumoured wedding by sharing a heart-warming note along with a sneak peek of the film’s first song, ‘Kesariya’.

Ayan took to his Instagram handle and posted a dreamy clip of ‘Kesariya’ in which Ranbir and Alia could be seen romancing each other on the streets of Varanasi.

In the post’s caption, Ayan penned a heartfelt note for the couple. It read, “For Ranbir and For Alia! And… For this Sacred Journey, they are going to embark on soon!”

“Ranbir and Alia… my closest and dearest people in this world… my happy place, and my safe place… who have added everything to my life… and given themselves completely and selflessly to our movie…! We just had to share a piece of their union, from our movie, from our song ‘Kesariya’, to Celebrate them… as a Gift to them, and to Everyone!!” he continued.
Ayan concluded his note by adding, “Wishing that the best of Energies and all the Blessings, all the Joy and all the Purity, surround them as they enter an amazing new chapter of life, together forever.”

Ahead of Alia and Ranbir’s speculated wedding, Karan Johar, who has produced ‘Brahmastra’, too shared the song’s sneak peek and wished the couple by writing, “Love is light and I know the amount of light you have brought into each other’s and our lives with your love. To new beginnings and more.” 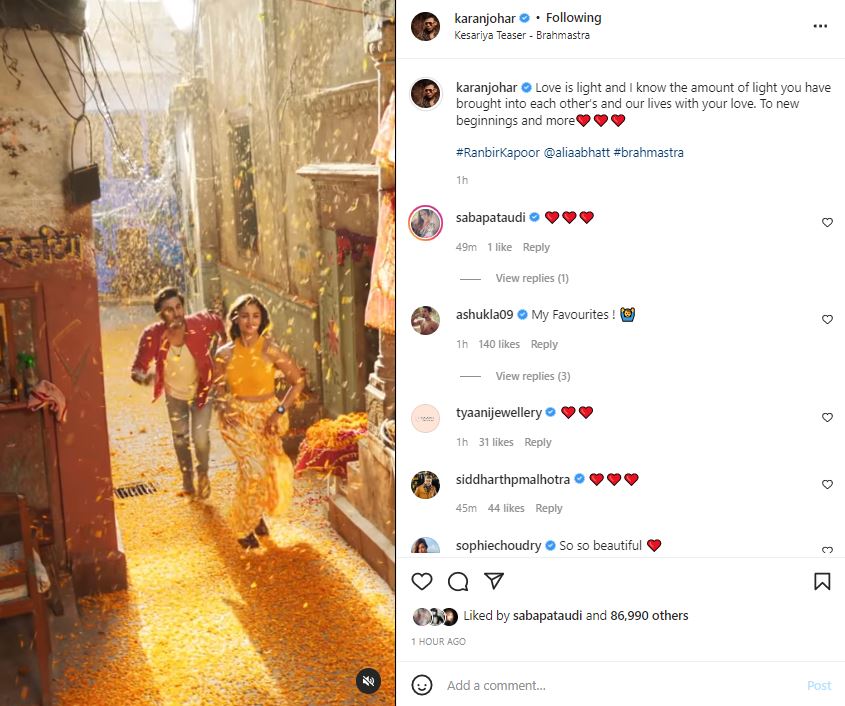 ‘Brahmastra’, a combination of mythology and science fiction, will release in theatres on September 9 in five Indian languages – Hindi, Tamil, Telugu, Malayalam, and Kannada.
Amitabh Bachchan, Mouni Roy and Nagarjuna Akkineni are also a part of the film.

Meanwhile, reportedly, the highly-anticipated wedding of Ranbir and Alia will be a 4-day-long affair at the RK house. The functions are expected to start from today onwards with the wedding on April 15.