Karan shared a bone-wrecking poster from the forthcoming film on Twitter that featured the ‘Raazi’ star and mentioned the news of the trailer crossing a significant number of views on various social media platforms.

“Fear is taking over..#Bhoottariler”, he tweeted alongside the poster. 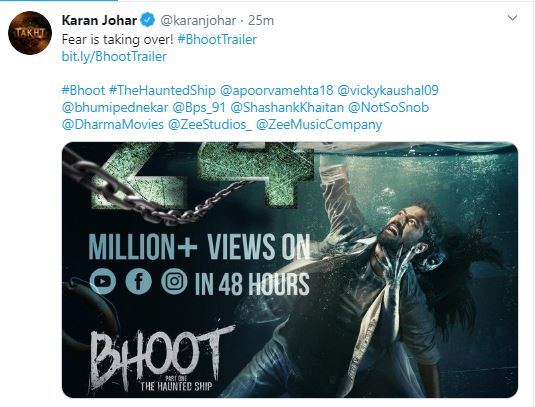 The 47-year-old filmmaker also documented the same in Instagram stories. 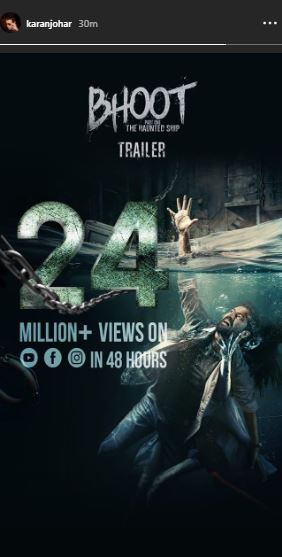 The mystery-thriller trailer that got released on Monday shows Vicky essaying the role of a survey officer of the Sea-Bird, and a series of unusual incidents happen that takes the movie plot further.

The trailer ends with spooky snaps from the film and concludes with a shot that shows Vicky being trapped in the ship as he is captured by the evil spirit of Sea-Bird.

‘Bhoot Part 1: The Haunted Ship’ is a part of the horror franchise that revolves around a ship that lies static on a beach.
Bankrolled by Karan Johar, the flick also features Bhumi Pednekar and Ashutosh Rana in pivotal roles.

The movie is slated to hit theatres on February 21, 2020, and will clash with Ayushmann Khurrana-starrer ‘Shubh Mangal Zyada Saavdhaan’. (ANI)