Mumbai: Actor Arjun Kapoor on Monday mourned the demise of the versatile actor Sushant Singh Rajput and shared a screenshot of the last conversation.

On December 13, 2018, Arjun reached out to Sushant and congratulated him for ‘Kedarnath’ while wishing him luck for ‘Sonchiriya’, which released in 2019.

The ‘Aurangzeb’ star put out a post on Instagram featuring a picture of the screengrab, and a snap sitting next to Sushant.

Along with the post, the ‘Panipat’ star recalled the memories with Sushant and wrote, “18 months ago… My last msg to him was when he posted about his mom a week after the release of Kedarnath. He was missing her I assume while the movie was being celebrated. I didn’t know him well enough though our paths crossed at yrf, events & screenings every now & then.” 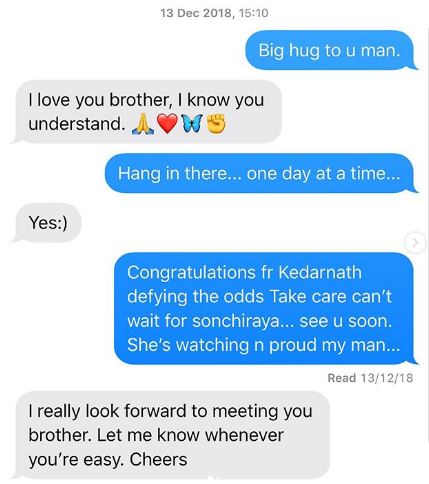 Confessing that he felt the pain of Sushant missing his mother, Arjun added, “I can’t say I understood what made him make this choice. I can say I felt the pain he did about losing his bearings & feeling that void of his mother.” 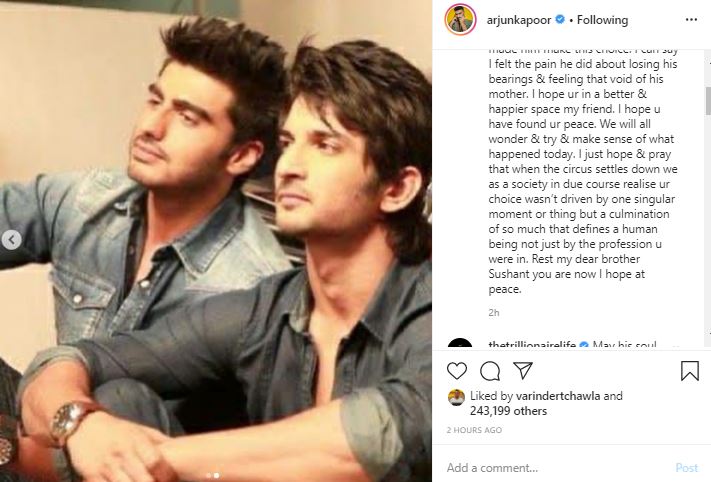 “I hope ur in a better & happier space my friend. I hope u have found ur peace. We will all wonder & try & make sense of what happened today. I just hope & pray that when the circus settles down we as a society in due course realise ur choice wasn’t driven by one singular moment or thing but a culmination of so much that defines a human being not just by the profession u were in. Rest my dear brother Sushant you are now I hope at peace, ” Kapoor’s note further read.

Sushant Singh Rajput allegedly killed self at his Mumbai residence by hanging.
However, no suicide note has been recovered from Rajput’s residence, as per the police and further investigation is underway.

The untimely death of the versatile actor has sent shock waves among celebrities and his fans alike.

Earlier actors including Anupam Kher, Deepika Padukone, Alia Bhatt and others expressed grief over the demise of the versatile star. (ANI)